What were on the minds and Twitter feeds of some of our favorite celebrity moms? Jenna Dewan-Tatum took to Twitter to introduce her baby girl Everly to the world, while Kim Zolciak, who is pregnant with baby number five, tweets about her growing family. Rounding out the list we have Mistresses star Alyssa Milano and Kristen Bell, who shared a pic of her breast pump (yes, really!). 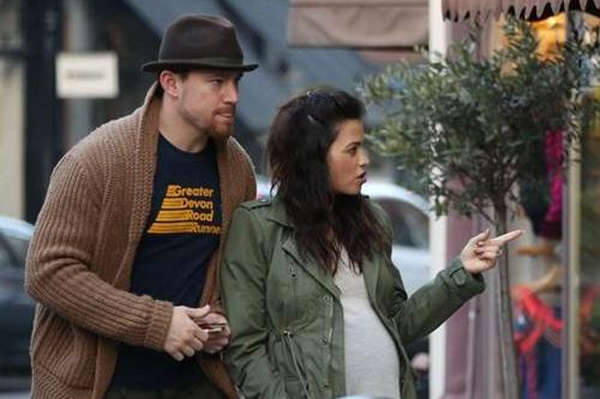 Actor Channing Tatum and his wife Jenna Dewan-Tatum welcomed their first child, a baby girl, and announced their happy news via Twitter.

“And baby makes three,” she tweeted with a link to her website that had a statement reading:

“Jenna Dewan-Tatum and Channing Tatum are thrilled to announce the birth of their daughter, Everly Tatum, who was born on May 31st in London. Sending love and light to Chan, Jenna, and Ms. Everly!“

No photo yet of their undoubtedly gorgeous baby girl, but Jenna did give a clue as to what may have helped her go into labor!

“Acupuncture for the first time! Hmmm think I loved it actually,” she tweeted on May 29. “Think it’s the most relaxed I’ve been in a while. Recommend!”

The 32-year-old actress also shared this pregnancy photo above of her wearing her favorite parka as she is out with Channing. “I’m in love with it!” she wrote of this Skaist-Taylor army green parka. 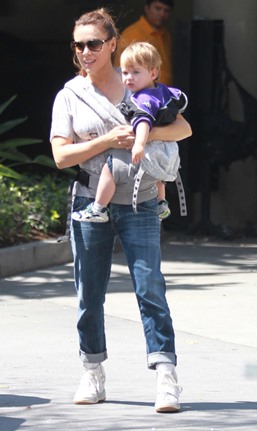 Alyssa Milano is back to work, starring in the steamy ABC show Mistresses after a hiatus while taking care of her son Milo. The 40-year-old former Charmed star took to Twitter to answer fan questions who used the hashtag #askmistresses.

“How long after your son’s birth did u start shooting 4 Mistresses?” asked one fan. “7 months,” replied Milano.

“did you bring your son to set while filming Mistresses?” asked another fan. “Every day,” she replied.

“how does your husband feel about scenes like this?” one fan tweeted to Milano, during one steamy scene of Mistresses. “He doesn’t love them but understands the job,” she replied.

“is it tough to film a tv show as well as being a mother?” another fan asked. “I think it is hard being a working mom no matter what you do for a living,” Milano replied.

For those Charmed fans, this one is for you!  “Do you miss playing Phoebe in charmed? and would you ever do a movie?” one fan asked. “Yes. Very much. And yes.”

Real Housewives of Atlanta’s Kim Zolciak is reportedly pregnant with her fifth child… just nine months after giving birth to her son Kash! Us Weekly is reporting that the 35-year-old reality star wants a little girl! She and her husband, Atlanta Falcons’ Kory Biermann, have sons Kash and 2-year-old KJ. Her two older daughters, Brielle and Ariana, are from her previous relationships.

We took to Twitter to find out if she is giving any pregnant revelations — and she is staying tight-lipped, possibly preferring to make her announcement on her new Bravo spin-off show Don’t Be Tardy.

“KJ, I’m going 2 have 2 charge ur escalade for a day I can NOT keep pushing u up the hill in it!! You have plenty of other toys to play with,” she tweeted, referring to the Power Wheels Fisher-Price kids Escalade, which retails for $419.

“About to go walking with the boys and hubby!!! Trying to mentally prepare myself lol it’s HOT outside!!” wrote Zolciak, who lives in Atlanta with her family.

She did share an image of her son KJ’s cool birthday cake! “KJs birthday cake! He wanted a monster truck cake and he got it thx Joshua!!!! Ur the best!!!!” she tweeted. “Happy Birthday to our sweet baby boy@kjbiermann I can’t believe you are already 2!!!! We love you so much!!!!! I’m so thankful God chose me to be your Mommy!!”

“Watching hubby build sandcastles with KJ!! @biermann71 you are the best daddy ever & the sexiest husband!” she later tweeted.

“My new backstage beauty routine: #pumpit #pumppumpitup” she tweeted, with this photo of her breast pump.

“Nashville, I had SUCH a wonderful time hosting the #CMTAwards W/@Jason_Aldean – thank you for having me back,” she wrote. 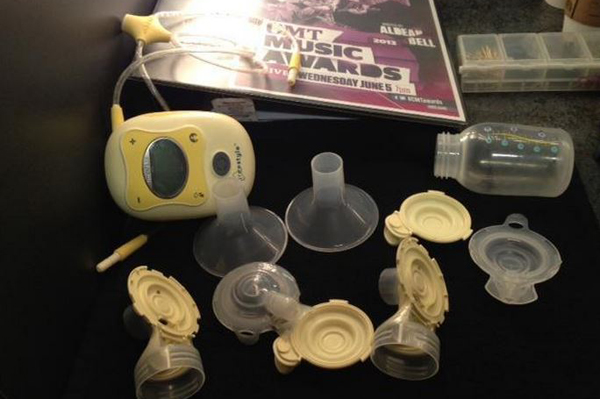 12 hrs ago
by Debbie Feit