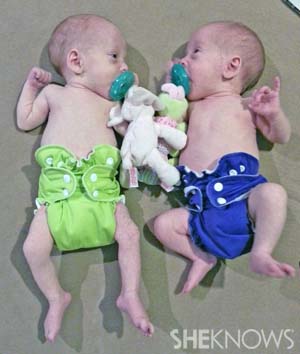 She was admitted at 23 weeks, 6 days, and thus began a months-long journey that was particularly unhappy and unpleasant, with little bright spots sprinkled throughout. The babies had to be monitored for one hour every eight hours, and she had to have three sonograms a week. “The two hardest parts were the constant worry, and being separated from my older girls and my husband,” she remembered. “I cried so many nights just wishing they could be there with me. My stay is still overwhelming to talk about.”

Everything was difficult, yet routine. “Full of hour-long sessions turning into five hours because the girls wouldn’t sit still, ultrasounds to locate babies, slumber parties every weekend with my girls, visits from friends, making new friends, crappy hospital food, video chatting with my family, board games and trip outs with visitors,” she shared.

The end was the worst, because they began having several spells of not being able to locate one of the babies’ heartbeats. They had originally decided to deliver at 34 weeks, but these episodes were leaving Emily a mess and worrying her care team. “I was really over the whole experience and terrified we were pushing our luck at this point,” she said. “I was so tired of wondering if today would be the day they would tell us we lost one of the babies.”

After a particularly frightening monitoring session that included several people trying to find a heartbeat and ultrasound machines being brought in, and still no heartbeat, Emily remembered telling the staff, “‘You are going to find that baby, and we are delivering today.’ She agreed, and said they had already talked about it during the early meeting with the perinatologists. I was a hysterical mess this entire time.” 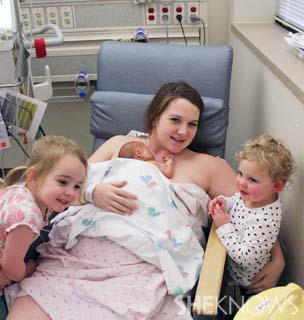 Emily was 33 weeks and 2 days when her girls were delivered that day by C-section. “After being told one or both probably wouldn’t make it, after all the horrible statistics and scary stories, they were here, and they were so cute,” she shared. “For the first time since my diagnosis, I felt relief. I remember on the operating table, feeling this huge weight lifted off my shoulders.” Charlotte was 4 pounds, 10 ounces and Eloise was 4 pounds, 8 ounces.

The umbilical cords gave the doctors, the staff and Emily herself a bit of a shock. “The umbilical cords that gave my children life also threatened them,” she explained. “Like we could tell in ultrasound, I had a lot of cord. It was all tangled, from top to bottom. They showed me pictures on the operating table, and I couldn’t believe what a little tango my girls did in there.”

Emily said that their NICU stay was happily uneventful. “The girls nursed like champs the first time, which I was told would be the hardest part,” she remembered. “Eighteen days in the NICU, at 35 weeks 6 days gestation, my girls were released to come home. Walking out of that hospital was one of the most overwhelming things that I have ever done. Unless you’ve been in a situation like that, I don’t think you can understand all the emotions that I felt during that walk. I was leaving with two healthy little girls, and I still can’t believe we all made it through.”

Emily’s life at home is a bit hectic as you can imagine. She’s exclusively breastfeeding her twins and cloth diapering them full time. She now has four children ages 4 and under, so if she’s not nursing a baby, she’s cleaning up a mess her 2-year-old made while she was nursing. As crazy as it sounds, she wouldn’t change it for the world. “I am proud of myself for never losing hope, never getting too down, and never forgetting to appreciate every single day,” she said.

For moms who are facing a similar situation with a rare mono-mono twinset, she has excellent advice: “Since this pregnancy is so rare, there are still a lot of doctors who don’t know how to correctly manage it. Take it day by day, and try not to worry. Stay away from Google, if that is too hard, at least take it with a grain of salt. A lot of the statistics out there for mono-mono twins are outdated. Appreciate every single day and remember that it is only temporary. No matter the outcome, this pregnancy will change you. I am a much better mother and wife after this experience. And I am so much stronger than I ever was before.”