Emily’s last pregnancy was one to remember — monoamniotic-monochorionic twin pregnancies are rare and dangerous. Happily, her girls were born healthy, but her story — including a 12-week hospital stay — is one of courage and grace. 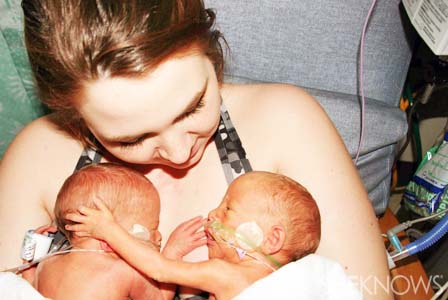 Emily, born and raised in St. Joseph, Missouri, had the surprise of her life when she found out she was expecting again. Already the mother of two young girls, she and her husband were using birth control when she popped up pregnant. And the surprises kept adding up.

Emily and her husband had been practicing natural family planning before she decided that she wanted to go on more effective birth control. They chose NuvaRing, and after three months she was due for a prescription refill. “I always test before doctor appointments because I hate surprises, and that was how I found out I was pregnant with my first,” she remembered. “I am glad that I did, so I could have my freak-out reactions in the comfort of my own home.”

Her husband didn’t believe her at first, but after taking six more tests and researching the false positives possibility with NuvaRing, he accepted it. Emily, however, had a more difficult time coming to terms with her new pregnancy. “I cried, I cried a lot,” she shared. “I think I spent a few weeks in bed crying. I hated the way I felt, and still feel guilty.”

At her first appointment, she wasn’t sure how far along she was, so they did a sonogram. She was too early to see anything besides an amniotic sac, so she was told to come back in three weeks. During that time, she experienced a lot of bleeding, heavy at times and including clots, so she assumed that she was no longer pregnant.

She was. The sonographer was making funny faces, and when Emily asked if there was a heartbeat, she was told that both of them had good, healthy heartbeats. “I just started crying,” she told us. “I remember mumbling about how I got pregnant on birth control, needing a new car and living in a two bedroom house. I calmed down enough to see that sure enough, there were two babies in there.”

After getting over the shock, she and her husband began to be happy and excited. “We both reacted better to finding out it was twins than finding out we were pregnant to begin with,” she shared. “Seeing them made it a lot more exciting, and real.”

Inkling of a problem 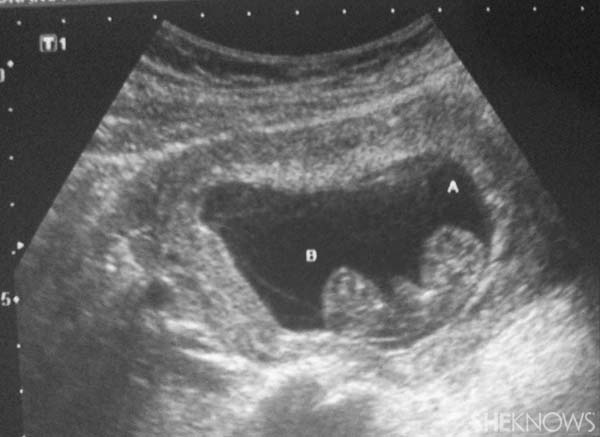 Emily posted her sonogram photo on an internet message board and was immediately notified that there may be an issue. “Someone commented, ‘Are those babies in the same sac? They look like it. If they are, the pregnancy is extremely high risk,’” she related. “So, to Google I went. I read that mono-mono (monoamniotic-monochorionic) twins shared a placenta and the amniotic sac. I read that the mortality rate of mono-mono twins was very high, due to cord tangling and compression. I went from excited, to devastated.”

She got in to her doctor as soon as she could, and they still didn’t see a membrane. Nor was there one visible at her next one two weeks later, when she was 14 weeks. “She was pretty certain she could see their feet intertwined, which would definitely make them mono-mono,” she explained. “She also said they appeared to be little girls. It was a very bittersweet appointment with lots of tears.”

Emily’s care was to be handed over to a group of perinatologists at St. Luke’s in Kansas City, Missouri. She explained, “Before leaving, the doctor actually said to me, ‘I’m not sure you quite understand. This is as high risk as it gets. One or both of your babies will likely not make it.’ She told us that their team hadn’t seen a case in over 5 years, and they were delivered at 24 weeks. She wasn’t very encouraging.”

Her first ultrasound at 17 weeks at St. Luke’s confirmed the mono-mono diagnosis, and they were also able to confirm that the babies were girls. They discussed what would happen during the rest of her pregnancy. Emily would be admitted to the hospital in between 24 and 28 weeks until delivery for near-constant monitoring and checking for signs of distress.

She had three appointments before going inpatient, and each was stressful. “Each appointment I would prepare myself for the worst,” she said. “So many of these babies don’t make it, so I was trying to keep in mind that there is a possibility that it might happen to us too. Thankfully, each appointment there they were. Hearts still beating, still bouncing around.”

Next up: More about Emily’s story