Happy Wednesday Hump Day — also known to us as Celebrity Baby Bump Day! We have rounded up the cutest pregnant celebrities of the week, including two new additions to the list. Jennifer Love Hewitt announced she is pregnant, as did actress Kate Winslet! Pregnant Kate Middleton showed off her baby bump in a pink dress, while Kim Kardashian wowed in white. Lastly, Jessica Simpson and CaCee Cobb compare baby bumps at CaCee’s baby shower. 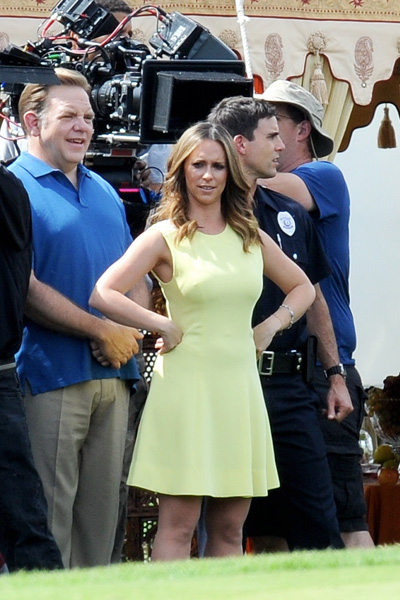 The Client List star Jennifer Love Hewitt is pregnant with her first child with her boyfriend (and co-star) Brian Hallisay! The 34-year-old actress confirmed the baby news to Us Weekly, saying “We’re so thrilled and happy to start a family.“

Hallisay, who plays her estranged husband on the Lifetime show, began dating Hewitt 15 months ago. The couple originally met when appearing on the NBC show Love Bites together.

Hewitt, seen here in a yellow dress as she filmed scenes at a golf course for her show, is reportedly around three months pregnant.

The actress, who has dated a string of actors including Jamie Kennedy, just purchased a $3 million home in Pacific Palisades where she will live with Hallisay. A source told RadarOnline that she wants to settle into her home and have the baby before the couple gets married.

“She loves Brian to death and thinks he’s Mr. Right, but she’s being very cautious about what she says publicly,” the source revealed.

Next up: Kate Winslet is pregnant with her first child with new hubby Ned Rocknroll