The Client List star Jennifer Love Hewitt is pregnant and expecting her first child! Get all the scoop on her baby bump status, including who the dad is and how far along she is in her pregnancy. 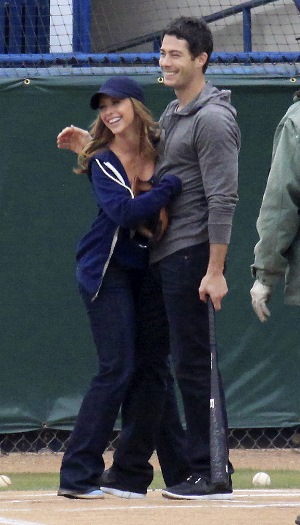 Jennifer Love Hewitt is pregnant! The 34-year-old star confirmed that she is expecting her first child.

“We’re so thrilled and happy to start a family,” the actress told Us Weekly in a statement.

Who is the daddy? The father-to-be is her co-star in The Client List, Brian Hallisay, pictured here with Hewitt as they filmed a scene for their show at a baseball field.

Hewitt and Hallisay originally met while appearing on the NBC series Love Bites. They reconnected 15 months ago when he began co-starring on her Lifetime show The Client List as her estranged husband Kyle Parks.

Hallisay, 34, is a Washington, D.C. native who has also appeared in Medium and The CW’s show Privileged.

Hewitt, who was once engaged to Scottish actor Ross McCall before breaking up in 2008, has dated other co-stars in the past, including her Ghost Whisperer co-star Jamie Kennedy, whom she dated for one year before splitting in 2010.

The actress has been open about her desire for starting a family, telling Us Weekly in 2010, ”I would love to have babies… one day. I’m obsessed with babies!”

How far along is Hewitt? The actress reportedly is early in her pregnancy and is “about three months along” a source reports.

No official word if the couple plans on getting engaged and married, with her publicist releasing this statement from Hewitt: “This is a wonderful time and we are looking forward to starting our family together.”

Hewitt has already started nesting, as she just purchased a $3 million home in Pacific Palisades where she and Hallisay will live together. A source told RadarOnline.com that they had planned all along to “buy a home together, have a baby and then tie the knot afterwards.”

“Jennifer’s going to take an unusual route this time around,” an insider revealed. “She loves Brian to death and thinks he’s Mr. Right, but she’s being very cautious about what she says publicly.“

Whatever her plans, it sounds like J-Love is currently feeling the love! “Jennifer is happier than she’s ever been,” the source revealed. “She can’t wait to set up house and start a family with Brian.”