Want to see the power of over 1 million teens? Do Something has that many teens in their back pocket, and they utilize the power of texting to mobilize volunteers and affect social change. What’s their secret? 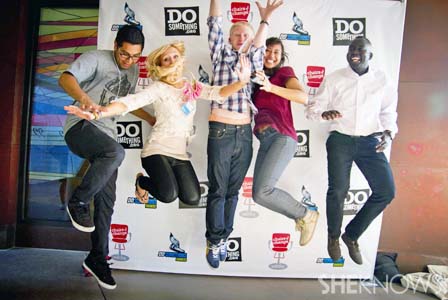 Teens are an ever-expanding segment of the population, and a driving force behind marketing campaigns for everything from skinny jeans to smartphones. So what if you could harness this huge group and steer them toward causes they care about? That’s exactly what Do Something does.

Young people can be very passionate about causes dear to their hearts. But how can they join forces and make things happen? How do you tap into the energy and enthusiasm of teens and convince them that being actively involved in social causes is cool? With 1.7 million members (and growing!) Do Something is the country’s largest not-for-profit exclusively for young people between the ages of 13 and 25 who want to tackle issues regarding social change. Think bullying, cruelty to animals, cancer or homelessness — the list of possibilities is endless. By spearheading national campaigns, Do Something is able to help young people make an impact without needing an adult’s help. In 2012, over 2.4 million people made a difference through DoSomething.org.

Rather than trying to get young people to part with their monetary resources, Do Something wants to capture their passion, time and creativity. They believe that young people have the power to lead, and don’t necessarily need adults to help them along the way. By establishing an environment of trust and respect, Do Something makes teens and young adults feel valued, powerful and that they are truly making a contribution to society. All of their programs are free.

The seeds of inspiration

Where did this idea grow? According to Naomi Hirabayashi, chief marketing officer of Do Something, “It started with seven words in a speech given by former president Bill Clinton, ‘Let’s do something and we’ll all win.’ Inspired, Andrew Shue and Michael Sanchez created Do Something, to get teens involved in giving back to their communities in 1993.” They may not have anticipated how large their newly-hatched organization would become, but are proud to see 1.7 million young people involved in causes they care about through the power of Do Something.

We wondered what the secret was to getting young people involved in a program like Do Something. “Hands down — the leadership,” says Hirabayashi. “Our CEO and Chief Old Person (yes that’s her real title), Nancy Lublin, who joined DoSomething.org in 2003, and Aria Finger, COO, have created something very special. We are not your grandma’s not-for-profit. Our goal is to be big, loud and easy (just like Rebel Wilson in Pitch Perfect, her words!),” adds Hirabayashi. They strive to make social action “bold, unapologetic and fun through unique national cause campaigns that activate young people on key issues they care about in a way that meets them where they are.”

With 20 years of experience in working closely with teens, we wondered if there were any particular projects that had grown into something even bigger.

“We’ve had the honor of working with incredible young social entrepreneurs for 20 years, and with the help of DoSomething.org resources, watch them grown into social change fearless leaders!” shared Hirabayashi. “For example, both Seth Maxwell of The Thirst Project and Adam Lowy of Move For Hunger have been part of the Do Something family for many years.”

The Thirst Project has raised $2.6 million and provided 100,000 people with safe, clean water. Move for Hunger is one of the nation’s largest year-round service programs for reallocating unwanted food items to local food banks. Both Maxwell and Lowy started early with Do Something, taking advantage of the resources offered like Boot Camp — a free day of social entrepreneurship training. “They both became finalists for the Do Something Awards, and have built successful and impact organizations that are fighting big causes, like access to clean water in Swaziland and providing hunger relief in America,” adds Hirabayashi.

Want to know what’s hot right now at Do Something? One current campaign called Undocumented for a Day lets teens learn about what it’s like to be living in the U.S. without proper documentation, through text messages that create an experience. Participants are encouraged to involve friends, and then to sign a petition supporting a path to citizenship for these people. The Thumb Wars project encourages young people to help stop texting and driving by handing out pairs of thumb socks that discourage texting. By sending in a picture of themselves wearing the thumb socks, teens are eligible to win a $5,000 scholarship. These two programs are just a few of the many causes Do Something encourages teens to rally around.

Encourage your teen or young adult to check out Do Something and see which social causes make a connection for them. Who knows where it might lead?