What were on the minds and Twitter feeds of some of our favorite celebrity moms? Rachel Zoe shared adorable pictures of her stylish son Skyler, while pregnant singer Monica answered questions from her fans — and even gave baby name hints! Melissa Joan Hart tweeted about losing the baby weight and shared adorable photos of her family. 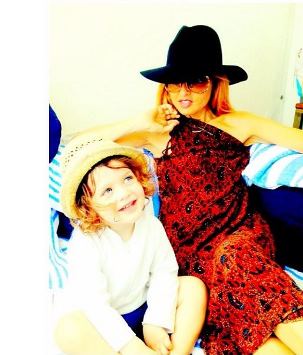 “Can’t everyday be Mother’s Day? Memories from a week ago with my baby boy,” tweeted Rachel Zoe, with this adorable photo of her and her 2-year-old son Skyler looking stylish in hats.

The celebrity stylist and fashion designer recently told me in an interview that she loves dressing him as a “mini version of my husband” Rodger Berman. Her favorite clothes for kids include a mix of affordable and high-end lines, including Baby Gap and J.Crew Crewcuts, Gucci and Stella McCartney Kids.

Speaking of her husband Rodger (AKA “Rodge“), Zoe tweeted out her amazing piece of bling that he gave her for Mother’s Day.

“Forgot to Instagram my most amazing Mother’s Day gift from my love @rbermanus…can’t breathe!“ she tweeted, with a link to her new necklace.

“Look who came to set with mommy today!” she tweeted, with a photo of her Skyler hamming it up for the camera.

She later posted a photo of her reading a book to Skyler, writing: “Can’t imagine a better way to start my day.” 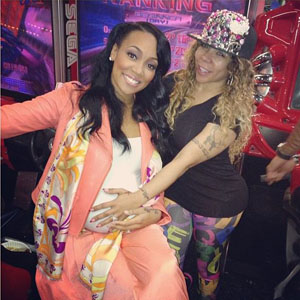 R&B singer Monica announced via Twitter that she is pregnant with her third child, her first with her husband Shannon Brown. She posted a photo of her baby bump during an event.

“5 months & counting. Excited“ she tweeted to Niecy Nash, who tweeted her congratulations and asked how far along she is.

Will she stick with the “R” baby names for baby number three? She gave a hint that she has already chosen a baby name — with the help of Tameka “Tiny“ Harris (@TinyMajorMama), who is the wife of rapper T.I.

“Me & One of the most loyal loving people I know @majorgirl our baby’s God-Mom,” she tweeted, along with this photo of her posing with Tiny. “she gave our baby a name we both love. Best part is it has so much sentimental value? #GodIsAwesome.”

She also took to Twitter to answer questions from her fans, using the hashtag #AskMoe.

“how did you keep your pregnancy a secret for that long?” tweeted one curious follower. “Lol its alot i only share w/my hubby & kids,” she responded.

“what are u craving more now then w/ the other babies,” asked another. “My cravings are the same actually. ice cream, fruit,” Monica wrote.

“is SB super excited??” tweeted another follower, referring to her husband Shannon Brown. “Yes he got exactly what he wanted gender and all LOL. hes a great husband.”

“You look amazing on tonight’s episode. How do you do it?” tweeted one fan to Melissa & Joey star Melissa Joan Hart, who just gave birth to her third son, Tucker, last September.

“@Nutrisystem has worked for me,” she replied back.

She later retweeted a post from People magazine, detailing her weight loss.

“Wow! @MelissaJoanHart reveals 29-pound weight loss — and says she feels more confident than she has in years,” they wrote, with a link to the article.

“I was 30 when I had my first child and now I’m 37, so each time it gets more difficult to take the baby weight off,” Hart told People in the article. “My metabolism has changed so it’s tricky.”

Hart and her husband, Mark Wilkerson are also parents to sons Mason, 7, and Brady, 5.

“Here’s a pic from #gamebreak playing UNO Power Grab — Brady schooled me, Mark and Mason!” she tweeted, with this adorable photo of the kids playing the card game. 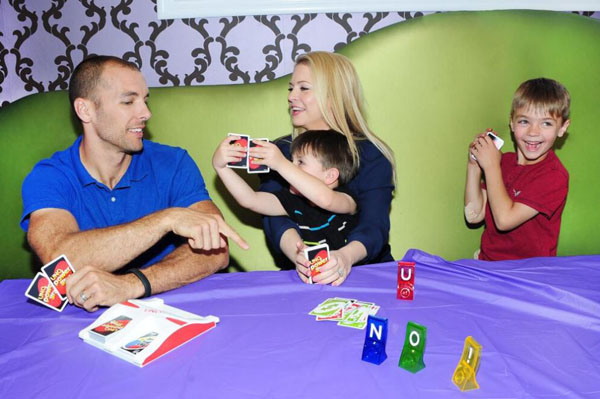 She also took questions from fans on Twitter using the hashtag, #hart2heart.

“Did you get your boobs done?” asked one follower. “No! but i had just had a baby!!!” she replied back.

“realized youre the only female in ur house. few years, toilet seat will never stay down!” tweeted another. “It will if i raise them right!” she responded.

“Would you ever consider @joeylawrence as a real nanny/babysitter for your kids?” tweeted one fan, referring to her Melissa & Joey co-star Joey Lawrence.