The smallest state in the union with the longest official state name (Rhode Island and Providence Plantations) has some of the best fairs and festivals in the northeast. It’s like the state doesn’t know it’s small — because everything is done big. 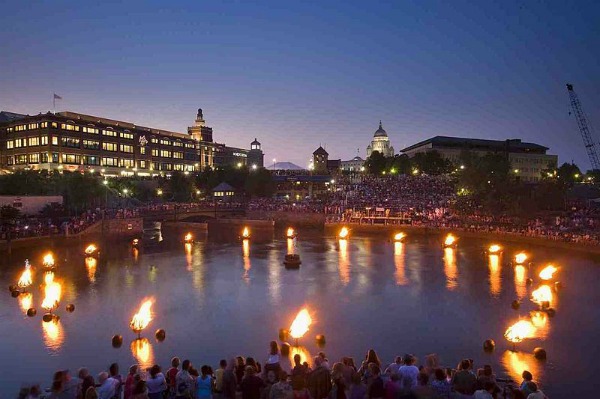 On seven evenings from late spring into fall, Providence becomes a regional public arts destination with Waterfire. Three rivers come together in downtown Providence, and in the river basin, cauldrons of wood are lit as the sun descends. Gondolas move up and down the rivers and people throng the riverbanks. Vendors and music add to the festive mood — but most of all, you’ll enjoy the strong sense of community. It’s public art at its best. Get there early and have dinner downtown before wandering the riverbank and admiring the visual of the fire so close to the water’s surface, as well as all the other terrific public art in downtown Providence.

For over 50 years, the Newport Folk Festival has been one of the premier music events on the east coast. Taking over Fort Adams State Park, the festival is two days of folk music — or at least somewhat folk-inspired music — on three stages in a beautiful setting. You’ll see major national and regional acts in a variety of genres, from historic to mainstream. Bring a cooler, some chairs and a blanket for maximum picnicking enjoyment. The kids will enjoy the Kidzone tent. Be sure to check out the craft vendors too!

For the last 80 years, Pawtucket has celebrated its Greek heritage with the Greek Festival in August. There’s dancing (modern and traditional), food and activities for kids. And did we mention Greek food? Lamb, gyros, spanikopita, baklava and all sorts of Greek regional specialties. Check out the Greek marketplace while the kids get their faces painted and do crafts. And make several passes by the Greek pastries to make sure you have done appropriate taste testing.

Each fall, boat people invade Newport — as if there weren’t enough there already! For 40 years, the Newport International Boat Show has been a destination trade show open to the public where young and old alike can indulge their yachting dreams. Ever wonder what a 60-foot catamaran looks like inside? Tour it! Then maybe learn about smaller craft closer to your family’s budget. There are plenty of vendors of nautical gear and related items, from books to clothes to toys and food, all in a festive waterfront atmosphere. You’ll see plenty of fascinating boats, products and people to make a day at the Newport Boat Show a worthwhile destination.

Shakespeare in the Park

Each summer, the Colonial Theater of Westerly hosts Shakespeare in the Park in Wilcox Park. Take a picnic and spend an evening recalling your high school study of Macbeth or Othello while introducing the old Bard to your kids — and discover just how much fun theater can be. It’s a great way to cap off a busy day — the show starts at 8 p.m.

The Norman Bird Sactuary higlights Rhode Island’s richly diverse avian population, and each fall the sanctuary hosts a harvest festival. Enjoy a weekend of food, entertainment, games, crafts and more. Take a walk on the seven miles of hiking trails in the sanctuary — and come back for a hayride or pony ride. Tour the home and garden competitions as well. Basically, you’ll find everything you need to make a day out with the family a whole lot of fun.

Gaspee Days celebrates a significant event in the lead-up to the American Revolution: the torching in 1772 of the British customs schooner, Gaspee, near modern day Warwick, Rhode Island. Two centuries later, the town of Warwick celebrates the defiance of the locals with the annual Gaspee Days. The Days includes commemorations as well as an arts and crafts festival, full of high-quality local and regional crafts and fine arts. Gaspee Days includes a food court, music and family-friendly entertainment, plus activities for kids.

What better way to take advantage of a beautiful day on a breezy peninsula than to fly a kite? Fly a kite with hundreds of other kite enthusiasts! The sky will be full of colorful kites of all shapes and sizes (and characters) that are sure to leave the whole family in awe. Participate in the special events for kids, as well as kite demonstrations. And if you don’t have a kite? There are vendors right there ready to match your family to the perfect kite.

Image by WFProvidence (Own work) [CC0], via Wikimedia Commons