With so much history of early America concentrated in such a small area of downtown Boston, it’s a wonder the idea for the Freedom Trail wasn’t thought up earlier. Created in the 1950s, when demolition of an historic site was threatened, the Freedom Trail is now a loved local sightseeing destination for natives and visitors alike. 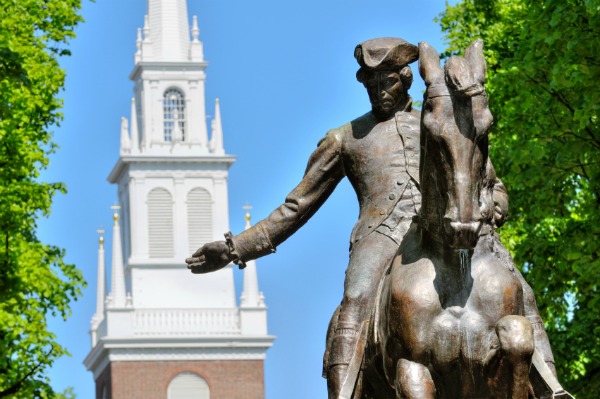 The Freedom Trail consists of 16 sites of historic significance in and around downtown Boston, connected by a brick path. You can start at the “beginning” (Boston Common), the “end” (USS Constitution) or anywhere in between. You can walk the trail on your own, or take tours offered by the Freedom Trail Foundation.

At each site on the Freedom Trail, a marker (at least) notes the significance of the site. You’ll see the graves of Revolutionary War patriots at the Granary Burial Ground, stop by the Old South Meeting House (where Tea Party participants organized), gaze at the spot of the Boston Massacre (watch for traffic!) and see Old North Church, where Paul Revere put two lamps in the window to signal that the British Army was on its way and began his famous ride.

All the while you’ll be in and around downtown Boston, so if you need to take a break for lunch, it’s easy to do. Faneuil Hall, a site on the trail, sits just in front of Quincy Market, which has a variety of choices for food.

When touring some of the larger of the trail sites, take care to respect current use. The Old Corner Bookstore holds a modern business, and the Old North Church is an active parish. Boston is also a busy city, full of locals doing business in addition to visitors taking in the historic sites, so watch for traffic and be aware of crowds.

The Freedom Trail is a great way to spend a morning or afternoon, taking in history and modern Boston. Wear your walking shoes.