While perhaps not a castle in the ancient fortress sense, this world-reknowned hillside estate is indeed a palace — with 165 rooms (including guest houses) and 127 acres of outdoor opulence, including cultivated gardens, the iconic Neptune and Roman Pools, sculptures, terraces and walkways with incredible views 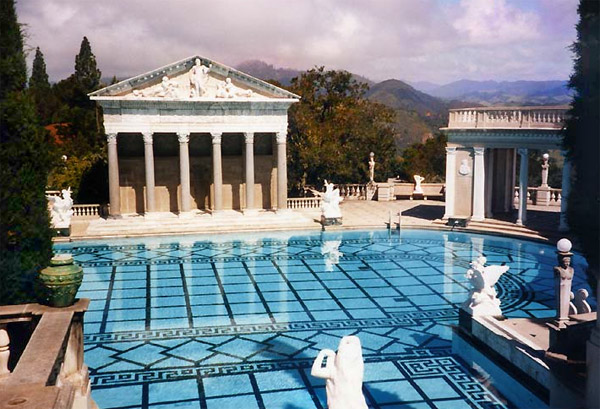 Hearst Castle got its start when a weathy miner, George Hearst, bought 40,000 acres of ranchland. By the time his son, publishing magnate William Randolph Hearst, inherited the land from his mother, the ranch was a grand 250,000 acres. The family used the land for camping trips, with elaborate dining and sleeping tents. (This is what they considered “roughing it.”)

In 1919, Hearst asked the famous San Francisco-based architect Julia Morgan to create something a little bit nicer than the tents. His exact words: “Miss Morgan, we are tired of camping out in the open at the ranch in San Simeon and I would like to build a little something.” And so they did.

Over the course of nearly 30 years, the two transformed the informal campsite into the world-famous Hearst Castle. But not everything was designed by Julia. The Neptune Pool, for example, has as a centerpiece the actual façade of an ancient Roman temple that Hearst bought and brought over to America. (That’s not the only part of Italian history that was transported: a third century Roman mosaic once served as the floor of the main entrance into the home.)

The main house (“La Casa Grande”) was built in Mediterranean Revival style combined with inspiration provided by a Spanish cathedral. The hillside, too, got a new Spanish name:  “La Cuesta Encantada,” or The Enchanted Hill.

After Hearst’s death in 1951, the property was donated to the state of California in 1957. Now designated a State Historic Monument, Hearst Castle is managed by the California State Parks system. Therefore, as strange as it may seem, this opulent estate has been affected by budget cuts. Mainly this means the guided portion of the tours are shorter, but you will have the opportunity to explore the outdoor grounds wihout a tour group.

There are several different tours available, and the estate is open every day except Thanksgiving, Christmas and New Year’s Day. Depending on the tour you choose, you will walk more than half a mile and up and down as many as 400 stairs, so comfortable walking shoes are a must. But the effort is worth it: The property has an incredible variety of historical artwork, both on the walls and integrated into the site itself.

As an Adoptive Mom, I Can Tell You This: Adoption is Not the Magic ‘Answer’ to Abortion

4 hrs ago
by Rachel Garlinghouse