Take an adventure to the Pacific Ocean with a visit to Big Sur and its nearby sites. Learn more about the wild beauty of the area in this peek into what the area has to offer travelers! 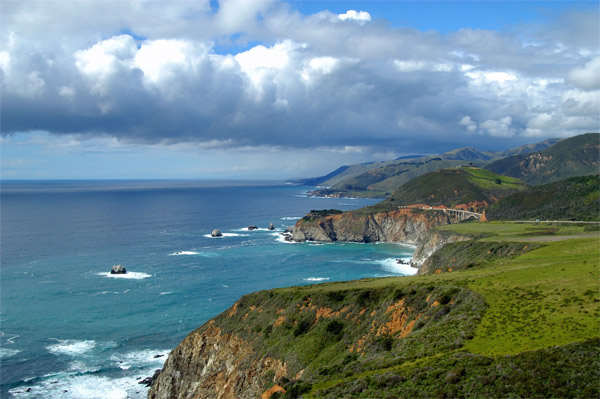 Just after we passed Point Lobos, my 10-year-old Midwestern niece, Hannah, breathed, “Oooh, my gosh! There’s nothing like this in Illinois.” She had just glimpsed Big Sur’s coastline for the first time. I smiled, as proud as if I’d created it myself.

“But how will we get down there?” she asked as she looked down, down, down to the crashing surf below. Hannah knew we had a horseback ride to the ocean planned, and the descent looked impossible.

I drove on, keeping my eyes on the road as we wove up and down, in and out, back and forth through the corrugated folds of Highway 1 on our way to Andrew Molera State Park. When we crossed spectacular Bixby Bridge, Hannah insisted I stop at the first vista lookout so I could take her picture with the bridge, the ocean and the coastal cliffs in the background.

“How on earth did they build it?” she breathed as I clicked the camera.

“I have no idea,” I admitted, as much in awe on my 20th crossing of the bridge as she was on her first.

The land flattened as we approached Point Sur Lighthouse, and soon we turned right into the park, following signs to the stables. While I signed waivers for our two-hour horseback ride, Hannah played with three acrobatic kittens that seemed oblivious of the horses’ hooves pawing at the dirt just inches from their tiny bodies.

Soon two other carloads of guests arrived, and in no time the wranglers matched horses to everyone’s individual ability — none at all, in Hannah’s and my cases — and we were on our way, following Dan, our guide for the afternoon. Nose to tail, the horses plodded in single file out of the corral, down the road and into a creek bed. When we emerged on the far side of the creek, we started across a wide meadow leading toward a sandy beach that’s sheltered from the wind by a large bluff.

“It can be foggy everywhere else in Big Sur, but at Andrew Molera Park, the fog bank tends to hover about a quarter mile offshore,” Dan told us as we arrived on the beach. We turned to check, and sure enough, the dense fog that stopped well beyond the breaking waves cut back to shore both north and south of us. Although the horses seemed eager to start on the return trip, and some of us — ahem! — had difficulty bringing our steeds to a stop, we posed for picture taking in the brilliant sunshine.

Our return trip paralleled the Big Sur River part of the way and then veered across a meadow filled with wildflowers and into a forest of sycamores, oaks and madrone. When we returned to the stable, the horses headed toward the water trough at a bone-jarring trot. We slid out of the saddle and fed them carrots and apples, enjoying the feel of their soft, fleshy lips gumming our fingers.

Just six miles down the road, we turned into Pfeiffer State Park and checked into our room at Big Sur Lodge. Our cottage had a fireplace and a small kitchen, so we bought supplies for a bedtime snack and simple breakfast at the grocery store just off the parking lot. Then we headed through a redwood forest and along a babbling brook to spectacular Pfeiffer Falls. Hannah’s camera came out of her fanny pack again. I glanced westward as we emerged from the forest and saw the sun beginning its nightly plunge toward the Pacific.

On to another adventure

“Hurry, Hannah,” I urged. “We can’t miss sunset at Nepenthe.”

Clueless, Hannah obliged me and scampered into the car. It took us only five minutes to make the 2-1/2 mile trip down Highway 1, but it was just enough time for me to tell Hannah that Orson Wells and Rita Hayworth bought the property on their honeymoon but never returned to use it. Nepenthe has been a gathering place for locals and tourists since the Fassett family acquired it in 1947 and turned it into a bar and restaurant.

We bought lemonades and joined perhaps 20 others on the rear deck, arriving just in time. The lower arc of the sun had just touched the horizon, and as we rested our elbows on the railing, the sky lit up with all the colors of a mixed roll of LifeSavers. Five minutes later it was over. The spectators gave a collective sigh and then burst into polite applause. Hannah stared at the clapping people as if she were witnessing a California miracle.

I’d made dinner reservations for 7 pm at Deetjen’s just half a mile further south. Although I knew we’d be welcomed in our jeans and flannel shirts, I smelled too much like horse for my liking, and Hannah had straw in her hair. We dashed back to the Lodge, took very fast showers, pulled on clean clothes, and arrived at the restaurant only five minutes late.

A historic place to dine

Built by Helmuth Deetjen in the early 1930s, the inn’s rustic, Norwegian-style redwood houses nestle along a stream in a shady canyon east of the highway. As one of the oldest establishments on the Big Sur Coast, Deetjen’s exemplifies the lifestyle of those who first came to the area to enjoy the peace and isolation. Deetjen’s old home houses the restaurant, so the many small dining areas overflow with the original family’s furnishings and memorabilia.

Hannah found a pasta dish that didn’t look “too Californian” to her Midwestern palate, and I chose mussels and lamb chops. The mussels in a garlicky broth made my heart sing, and I insisted Hannah try one. She stared at it, bravely ate it and said, “Mmm-hmm,” before turning back to her pasta. So I ate the rest of them myself.