The operative word in Las Vegas is “big.” Everything is larger than life. People come to Las Vegas to be overwhelmed. You don’t just “go to a show” in Las Vegas — you strap yourself in to experience an evening. After all, no one is bashful about spending money here, and all that money can buy some pretty cool stuff. Nowhere is this more evident than Mandalay Bay’s Shark Reef. This is money well-spent. 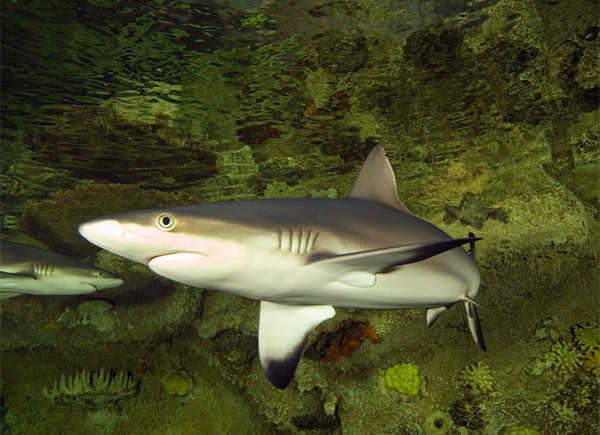 This isn’t your average fish show — and I’m not just talking size, either. Though with more than 1.6 million gallons of seawater homing more than 2000 creatures (including 15 different shark species), the size is nothing to sneeze at. The whole package is considerably more visually stimulating, interesting and awe-inspiring than any other aquarium I’ve ever been to.

The first thing you notice upon entering is the décor both in the displays and out. You aren’t looking into a fish tank — you’re peeking beyond well-worn stones into an unsuspecting underwater world.

Alligators sun on stones like the ones under your feet, and sting rays swoosh by a crumbling staircase. It’s as if you’ve left the modern world and traveled to an underwater city that has been abandoned to sea life. The crumbling staircase roots us firmly in the fish world — the man-made object that is such an intimate part of their world pulls us in — sharing that closeness visually, since it isn’t time for us to get our hands wet just yet.

Next, you’ll want to start the audio tour. Don’t worry: there is no hurrying along to keep up with the tape or frantic rewinding to catch a missed phrase. This tour is contained in a long wand that can be comfortably held up to either ear (it’s long enough to be held up without arm fatigue). Each exhibit has a number that can be typed into your wand for an audio explanation. You can listen to the explanations as many times and in any order you want.

The audio tour truly is self-guided, and frees you from pesky exhibit lines. For example, if everyone is gathered around Exhibit 10, you can skip ahead to Exhibit 11, and return to 10 when the crowd has passed. The tour guide can get a bit long-winded, but you can stop him at any time, and even fast-forward. The recording is filled with interesting facts, and, yes, even the occasional corny joke.

Even more interesting than what you’re hearing, though, is what you’re seeing. This is not a series of little tanks. This is an intricate underwater world with passages for air-breathers carved into it. You can’t see the back of the tank. The coral reef appears to go on forever. Then you reach the shark room and experience Surround Shark — an underwater glass room brings you as close to sharks as you ever want to be. They muscle by you and off into the murky “sea” of a tank, completely unfazed by your presence. A guide points out the different types of sharks as they pass, and even a 200- or 300-pound tortoise makes an appearance. It is an incredible experience. Definitely a “Don’t miss!”

That’s right, there is a petting tank. Sting rays (sans stingers), stripey fish (that’s their technical name), crabs and starfish inhabit a medium, shallow tank where the brave and the sometimes brave can reach in and have a tactile fish experience. Don’ worry — they like to be petted, and often come right to you the minute you put your hand in the water.

Some of the sting rays are outright flirts, scaling the wall a bit to secure your undivided attention. There are more low-key fish as well, though. I finally found a sting ray that sat very, very still in a relatively empty corner of the tank. His specialty was wimps who wanted to touch a fish but feared sudden movement (such as people who had seen Jaws too many times). I am a wimp such as this, and those of my ilk will be glad to know: there is a friendly sting ray waiting for you.

More about the Shark Reef Aquarium in Las Vegas