If you’re in NYC, come on out for a Coney Dog and some hearty family fun! At Coney Island, you will find something for everyone — and create some memorable moments. 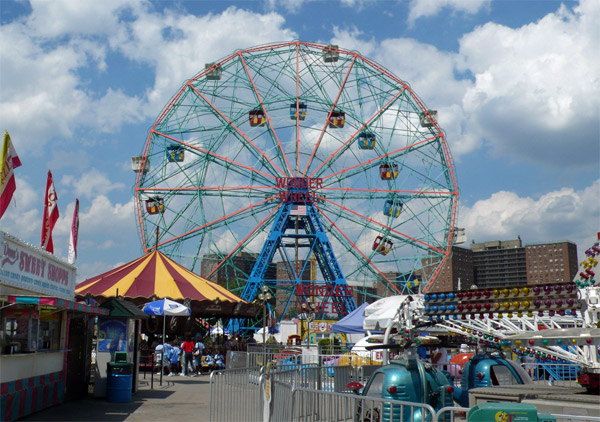 Coney Island is a beach neighborhood in Brooklyn that is known worldwide for its amusement park, which boasts over 50 rides and various other attractions. Some of the fun includes the Cyclone Roller Coaster, Luna Park, the Wonder Wheel (pictured above), Scream Zone and the El Dorado Bumper Cars and Arcade. Nearby is the New York Aquarium — another don’t miss destination.

Coney Island became a major resort destination after the Civil War, and the first amusement ride — a carousel — was built in 1876. Unlike a park such as Disneyland, Coney Island is not a centrally-managed park, and each ride or attraction is owned by an individual company.

If movies are your thing, you also have to check out the film screenings — not to mention the annual Coney Island Film Festival.

The hot dog was invented on Coney Island, and now, Nathan’s hot dogs are an iconic symbol found not only on the island but throughout New York City! This all-beef treasure will make your mouth water, and you will be ruined for any other hot dog for the rest of your life! If hot dogs aren’t your thing, then there are at least twenty other places to grab something to eat — so come hungry and try everything. Visiting New York means you can expect an amazing experience for the palate.