Carved out of a limestone cliff over 50 feet up, this historic Native American site is worth an educational detour on your next drive through Arizona. 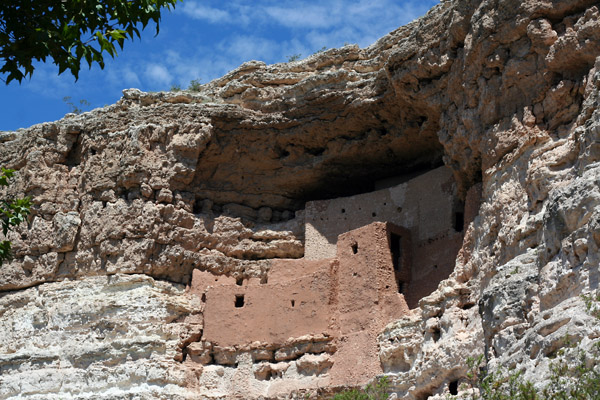 No need for revenge

Halfway between Phoenix and Flagstaff right off Interstate 17 lies this mysterious relic of a long gone native American tribe. The Montezuma Castle National Monument, one of the first four National Monuments dedicated by Theodore Roosevelt in 1906, is like a “prehistoric high rise apartment complex” originally built by the Sinagua people around 700 AD, and occupied until around 1425 AD.

Carved directly into the limestone of the cliff wall, when the settlement was discovered in the 1860s it was (incorrectly) named for the Aztec emperor Montezuma II, due to the belief that the emperor was connected to their construction. In fact, the dwelling had been abandoned 100 years prior to Montezuma’s birth and it was not a castle at all.

The monument is easy to visit, located right off exit 289 of I-17 and a quarter-mile paved paved trail (suitable for strollers and wheelchairs, too) leads from the visitor center along the base of the cliff. Access to the ruins themselves is not permitted, however, in order preserve the structure.

The visitor center also contains a museum dedicated to the Sinagua artifacts, tools, and other relics found in the dwelling, along with a gift shop. Nearby, check out the Out of Africa Wildlife Park!