Although tornadoes occur in many parts of the world, these destructive forces of nature are found most frequently in the United States east of the Rocky Mountains during the spring and summer months. In an average year, 800 tornadoes are reported nationwide, resulting in 80 deaths and over 1,500 injuries.

What is a tornado? 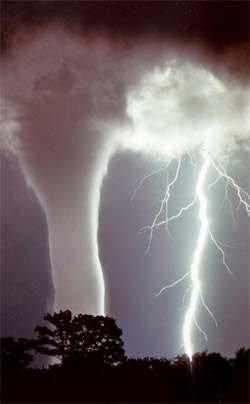 A tornado is defined as a violently rotating column of air extending from a thunderstorm to the ground. The most violent tornadoes are capable of tremendous destruction with wind speeds of 250 mph or more. Damage paths can be in excess of one mile wide and 50 miles long. Once a tornado in Broken Bow, Oklahoma, carried a motel sign 30 miles and dropped it in Arkansas!

Thunderstorms develop in warm, moist air in advance of eastward-moving cold fronts. These thunderstorms often produce large hail, strong winds, and tornadoes. Tornadoes in the winter and early spring are often associated with strong, frontal systems that form in the Central States and move east. Occasionally, large outbreaks of tornadoes occur with this type of weather pattern. Several states may be affected by numerous severe thunderstorms and tornadoes.

During the spring in the Central Plains, thunderstorms frequently develop along a “dryline,” which separates very warm, moist air to the east from hot, dry air to the west. Tornado-producing thunderstorms may form as the dryline moves east during the afternoon hours.

Along the front range of the Rocky Mountains, in the Texas panhandle, and in the southern High Plains, thunderstorms frequently form as air near the ground flows “upslope” toward higher terrain. If other favorable conditions exist, these thunderstorms can produce tornadoes.

Tornadoes occasionally accompany tropical storms and hurricanes that move over land. Tornadoes are most common to the right and ahead of the path of the storm center as it comes onshore.

Be prepared with food and water for emergency situations

How to talk to your kids about natural disasters