Take a look at some huge Arizona dust storm videos — an impressive 10,000 foot-tall wall of dust, 30 or more miles wide, moving quickly across the desert and into the cities around Phoenix. 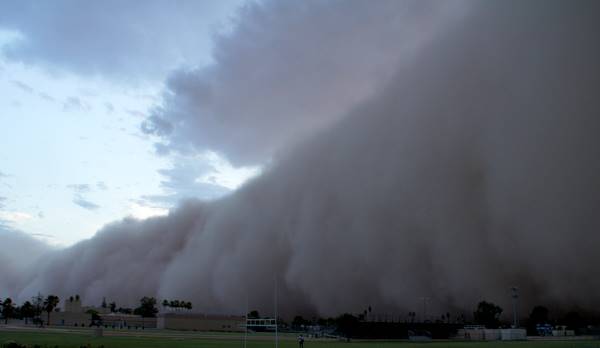 A wall of dust and sand

Blowing dust storms, known as “haboob,” look impressively dangerous, but are more of a nuisance than anything. The main hazard of such dust storms come from the fact that they can severely reduce visibility — creating unexpected and unsafe conditions for drivers.

Dust storms can be expected during the afternoons of hot summer days when thunderhead clouds are seen — they are most common between the months of May and September in southern Arizona. The storms generally result from thunderstorm activity that originate in the southeastern part of the state (or in Mexico), and become hazardous to traffic as they move northwest toward the metropolitan area. They have the appearance of solid walls of dust, and — as can be seen above and in the videos below — can be seen approaching from some distance. (By the way, the word haboob is derived from the Arabic word habb, meaning wind.)

If you see a dust storm, the Maricopa County Department of Emergency Management gives the following suggestions:

According to the Arizona State Department of Transportation (ADOT), an average of five people each year will die, and many others are injured as a result of such blinding dust storms.

Watch the storms in action

This first video here is a time-lapse video, shot from a hill at Sun Ray park in Ahwatukee (Phoenix), Arizona on July 5, 2011, over the course of about 5 minutes:

Here’s another time-lapse video of the same dust storm:

46 mins ago
by Thea Glassman