Kid-size fun and leaning is around every corner in the heart of the Seattle Center. Check out the Seattle Children’s Museum for lots of educational amusements! (But even though it truly offers fun for all ages, be sure to actually bring along a child — grown-ups can’t get in without a kid in tow.) 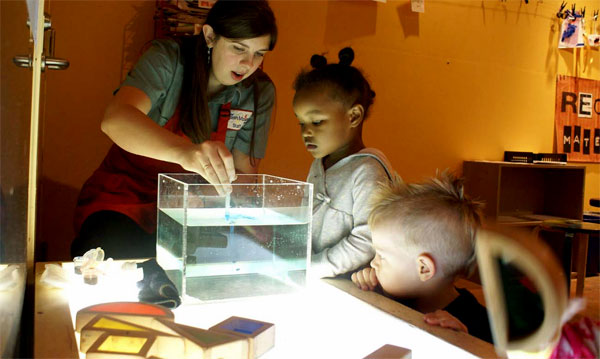 Fun for all ages

After a few visits to Seattle Center’s Center House, the Children’s Museum’s Mountain Forest becomes very familiar. The only part of the museum that is visible on the food court level, you can almost always see a group of children climbing around and their laughter filters through the space above, which is open to the tall ceiling of the main area. It looks like a lot of fun.

The Mountain Forest, though, is just the tip of the iceberg. It dominates your first view of the museum (both from above and from the basement-level entrance) but every corridor that surrounds it opens, Wonderland-like, to an entirely different world.

A drop-in craft/art project room, the Imagination Studio holds 15 budding artists and gives children a chance to try their hand at the project, such as “self portraits,” at their own pace. Younger children might be more enamored of the next stop: Cog City. This room is devoted to mechanical means of moving whiffle balls, four-square balls and beach balls. 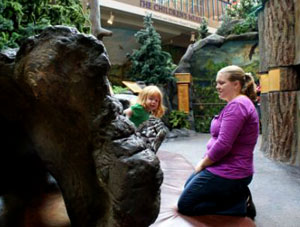 The obligatory conveyor belt is flanked by a vacuum tube that can be manipulated by “steering wheels” to pick up small four-square ball and a maze that whiffle balls run through when you pull levers to move the entire maze left, right, back or forward. The exhibits were, for the most part, self-explanatory, but there was one that I couldn’t figure out at all. The children, however, did not seem to have that problem — or, if they did, it didn’t dampen their enthusiasm.

Installation art is a recurring theme here, from the usable foam rubber and found object bench, to the special John Singer Sargent exhibit which was created to give the children the feeling of walking into one of Sargent’s paintings. Kid-created art decorates these hallways as well, and it serves to add to the sense of a wonderful, welcoming place.

Perfect for all kids

The Seattle Children’s Museum has all of the earmarks of a kids’ museum, such as an area with blocks, percussion instruments and children’s books. The museum also explores other cultures as well. Its Global Village does not stop at the post office and grocery store — it also has homes, businesses and transportation from the Philippines, Japan and Africa.

Be careful, though. When I say “kid size,” I really mean “kid size.” Grown-ups run the risk of hitting their heads on the low doorways and ceilings. It’s absolutely delightful, though, to see what might be in the cupboard of a Japanese house or to ride the public transportation in the Philippines. The exhibit is very accessible and would be interesting to both young children (who love to “drive” the vehicles) and older children (who might be more interested in the details of foreign cultures).

One of the neatest things about the museum is the Bijou theater. Not simply a red curtain with a few costumes stored behind it, this theater has scripts and a cue book for the little producers. Pictures in the cue book correspond to buttons that change lights and cue sounds like thunder or horses running. 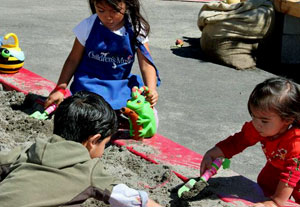 The youngest children are not forgotten. Discovery Bay is designed for kids age 2-1/2 and younger. It sports a whale to climb through, blocks, books and a little set of stairs for kids to walk up and down as many times as they like. One little girl, though, only had eyes for the rather ordinary bench left for parents to rest on. Her exasperated mom said, “All this and all you want is the bench?” So, really, there’s something for everyone here, even those kids who would rather play with the box than the toy.

The Seattle Children’s Museum is located at 305 Harrison Street in the Seattle Center’s Center House. For information on current exhibits, admission prices, group rates and birthday parties, see their web site at thechildrensmuseum.org.

Be a tourist in your own town: Visit the Space Needle!

20 hrs ago
by Allie Merriam

21 hrs ago
by Allie Merriam