Are you a stay-at-home parent in need of some adult interaction? Why not join — or start — a playgroup? It’s not only great for the kids, but a savior for a mom’s or dad’s sanity. 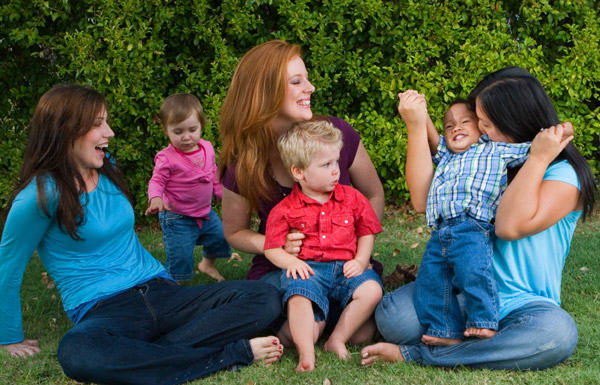 You’re a stay-at-home mom or dad with a young baby, your first. Even though you’ve lived in the same house for five years, you’re having a heck of a time finding others like you — moms and dads who need a break from the monotony that often comes with caring for an infant at home.

How do you find folks with whom you’ll be compatible, and just as importantly, with kids your own will enjoy being around?

If you’re like Jan, a mom in southwest Houston, Texas, you do it with a combination of the gift for grocery store gab, a matter-of-fact managerial style and a finely-tuned radar for the warm fuzzies.

Start a playgroup with little or no money >>

Several years ago, Jan was that mom, searching for companionship and opportunities for her child to play with others. She soon found a local affiliate group of a national “mom’s” organization, and quickly paid the required annual dues.

However, there was a small problem; the group’s meeting place and most of its members were a good 20 minute drive from Jan’s home. Twenty minutes to most Houstonians may seem like average travel time, but to a parent who is brand new at the diaper-bag-stuffing, bottle-fixing-up routine that comes with babies who live on their own schedule, any drive longer than 10 minutes can be daunting.

Never one to passively accept a less than workable situation, Jan started reaching out in her usual haunt — the grocery store. “Whenever I saw another mom with kids around my son’s age, I’d strike up a conversation, talk for a few minutes, and if I got the warm fuzzies, offer to exchange phone numbers,” she says.

What if those fuzzies never appeared? “I’d end the conversation with, ‘Nice to meet ya,’ and move on,” she says.

Creating your own playgroup

One January, after rounding up seven other moms of little ones with her shopping banter, Jan started organizing weekly gatherings for the group. “It wasn’t very organized at first. I’d call everyone on a Monday to say where we’d go on Thursday,” she says.

WHERE TO GO AND WHAT TO DO WITH YOUR PLAYGROUP

Once the group grew by word of mouth to 15 member moms, Jan put her skills as a former accounting firm manager to work, distributing to everyone copies of a monthly advance calendar and phone list.

Since then, the group has grown to a total of 57 caregivers (some are grandmothers or dads) on her e-mail list, with 45 who actively attend any of the various subgroups that have formed: a Recipe Club, Moms Night Out, Field Trips and Moms Helping Hands, in addition to the usual Thursday playgroup gatherings, all through no advertising other than word of mouth.

Although the group has grown very large, Jan says usually only 10 to 20 members and their children meet for any given activity. Each month, weekly scheduled activities include a field trip, an arts and crafts day and a music day (held at nearby parks) and a visit to the Children’s Museum.

Toddler happy hour: How to start your own playgroup >>

In regards to finding and planning the field trips, Jan remembers the first year as the toughest — now she just uses previous calendars to help build new schedules. Both arts and crafts and music day are managed by moms with a particular interest in those activities. Jan refers to them and the women who head up the other subgroups as “chairmoms.”

Aside from the chairmoms reporting in to Jan so she can add their plans to the schedule, there’s no hierarchy to this group — no teams, no committees, no board — just Jan, her PC and cell phone.

Jan says she considers herself lucky to be affiliated with the members of her playgroup, which she reports has avoided any issues requiring that someone be asked to leave or similar situations common in large groups. Part of the magic, she believes, is her “warm fuzzy rule,” explained to all new members.

“Our members are invited to join us, by people who like them,” Jan says. While members may occasionally and transiently group together based on children’s ages, no exclusive cliques have ever formed.

Jan is no longer a member of the dues-required organization. “This playgroup costs me nothing, not a thing, and through it moms are offering each other support, asking for and getting experienced advice and our kids are getting the socialization that they need,” Jan explains. Running the organization offers other benefits for her. “I thrive on managing, and I was stagnating before starting this playgroup.”

Lest you think that managing the playgroup takes all of Jan’s time, know that she is also class manager for a Jazzercise group and a direct sales representative for a popular cosmetic company. She admits to being a perfectionist and very experienced in managing groups, so when I asked her what are some tips a “regular” parent should know before starting their own playgroup, she suggested:

So, what happens when her own kids get too big to participate in playgroup? Jan says that she will try to handpick a successor whom she feels will care for her “other baby” just as she has done — with confidence, ease and warmth.

4 mins ago
by Taylor Plumstead