Few people realize what a rich culinary scene Ohio has, beyond being the birthplace of Wendy’s. Each of the major cities are home to major chefs, like Michael Symon in Cleveland and restaurateur Cameron Mitchell in Columbus. Although these chefs work in upscale restaurants that might not be the most appropriate place to take children, there are plenty of other exciting restaurants to dine out as a family. 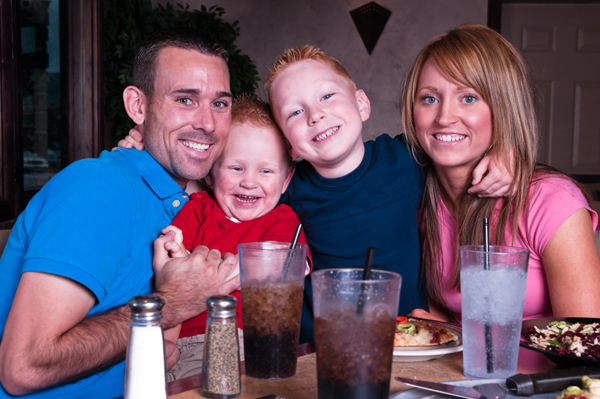 Max and Erma’s – In the early 1970s, Todd Barnum and Barry Zachs bought a little restaurant called Max and Erma, and began an Ohio tradition of great burgers, warm chocolate chip cookies, and unlimited topping ice cream bars. There are now Max and Erma’s all over Ohio, and even a few sprinkled in other parts of the states.
Skyline Chili – In 1949, Nicholas Lambrinides and his sons opened a small restaurant in Cincinnati, Ohio. They began serving what would become known as Cincinnati-style chili. Today there are more than 130 Skyline Chili restaurants in Ohio and three other states. Kids and adults love the spaghetti with chili and chili coneys (hot dogs topped with chili).
Bob Evans Restaurants – Bob Evans was founded in SouthEastern Ohio and began as a sausage shop. Now the same sausage recipe is served in Bob Evans restaurants throughout Ohio and beyond and are available at supermarkets as well. The kids’ menu at Bob Evans is filled with favorites like the Plenty of Pancakes platter, and the seasonal fruit breads and pies are always a hit.
Steak ‘n Shake – Steak and Shake is a fun chain of restaurants with iconic black and white checkerboard décor that can be found throughout Ohio featuring a fairly standard menu of burgers, chicken nuggets, and a wide selection of hand dipped milkshakes and malts. Kids receive a cardboard 1960s car to build as they wait for their burger, shoestring fries, and shake.
City Barbeque – Ohio is not known for its barbecue, but it should be, and it might soon be if word keeps on spreading about City Barbeque. Each restaurant of this Ohio chain smokes their own meat and makes everything from scratch each day. Kids will love the hush puppies, the banana pudding, the mac and cheese, and gnawing on ribs during Buck a Bone Tuesdays. Locations throughout Ohio in and near Columbus, Dayton, and Cincinnati.

NorthStar Cafe – Northstar is a unique restaurant committed to celebrating local food and serving it in a casual and simple setting. Diners order at a counter when they first walk into the restaurant, and seat themselves at long community tables or in cozy booths. Kids and adults will be able to choose from the best veggie burger in town, beef burgers, pizzas, stir fry dishes, and homemade pastries. Restaurants like these are an easy way to show children how to eat healthily and sustain local agriculture. There are two locations in Columbus, and a third location will be opening soon in Easton. Beechwold, 4241 North High Street, Columbus, Ohio, 43214. (614)784.2233 Short North, 951 North High Street, Columbus, Ohio, 43201 (614) 298.9999 Open Daily 9AM – 10PM.
Genji Steakhouse – Children love both the show and the food at Genji Steakhouse, a hibachi steakhouse where the food is cooked right in front of you. The chefs will thrill the kids by lighting a huge fire while cooking the food. But beyond the theatrics, the quality of the food is excellent and very plentiful. A great destination for a special family outing. 5874 Sawmill Road, Dublin, OH 43017 (614) 792-2500
Graffiti Burger – The graffiti burgers mission is simple: to serve burgers, great burgers, and nothing else. And they deliver on their promise, serving delicious burgers, fries, and shakes in a fun environment with dozens of toppings to choose from. Kids will love the wild décor of graffiti-covered walls. There are now three locations in Dublin, Granview, and Pickerington. Hours are Monday – Saturday from 11AM – 10PM and Sunday from 11AM – 9PM.

Angelo’s Pizza – Angelo’s is a Cleveland institution, and the winner of the Cleveland Magazine 2010 Silver Spoon Award. Not only is their pizza universally adored, but they also offer birthday parties with your child’s favorite character from the Little Mermaid to Star Wars. 13715 Madison Ave., Lakewood, OH. Phone (216) 221-0440  Open 11AM Daily.

Zip’s Cafe – Cincinnati residents rave about this local tavern that is frequented by yuppies and families alike. The Zip’s burgers are renowned throughout Cincinnnati. It is a genuine neighborhood gem. 1036 Delta Ave, Cincinnati, OH 45208 (513) 871-9876
Newport Pizza Company – 601 The Newport Pizza Company is definitely a step up from your grab it and go pizza joints. It has an inventive pizza menu, including the Cincinnatus, a pizza that looks like Skyline dip, and Buffalo chicken pizza. Plenty here to keep both parents and kids happy. 601Monmouth Street, Newport, KY 41071(859) 261-4900

22 hrs ago
by Tonilyn Hornung