After Angeline Jolie revealed in an op-ed for the New York Times that she had the mutated BRCA1 gene and had undergone a preventative double mastectomy, the world took notice. 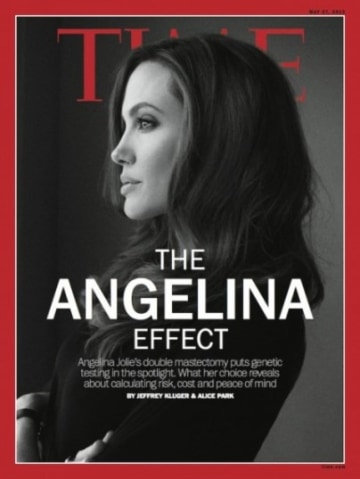 The latest edition of Time Magazine examines “The Angelina Effect” on how her decision puts genetic testing in the spotlight.

“My mother fought cancer for almost a decade and died at 56,” Angelina Jolie writes in her moving op-ed piece for The New York Times. “She held out long enough to meet the first of her grandchildren and to hold them in her arms. But my other children will never have the chance to know her and experience how loving and gracious she was.”

In her piece, Jolie writes that she tries to explain the cancer that took away her mother and their grandmother. “We often speak of ‘Mommy’s mommy,’ and I find myself trying to explain the illness that took her away from us. They have asked if the same could happen to me. I have always told them not to worry, but the truth is I carry a ‘faulty’ gene, BRCA1, which sharply increases my risk of developing breast cancer and ovarian cancer,” Jolie writes.

It was in this moving article titled ‘My Medical Choice’ that the 37-year-old Jolie explains that this gene means that she has an 87 percent chance of developing breast cancer and a 50 percent risk of ovarian cancer, which is what her own mother died of.

“Once I knew that this was my reality, I decided to be proactive and to minimize the risk as much I could. I made a decision to have a preventive double mastectomy,” she writes.

My kids see my small scars and that’s it…

Jolie and her boyfriend Brad Pitt have six children together (Shiloh, Maddox, Pax, Zahara, Vivienne and Knox) and she explained how they were a huge reason why she decided to make this medical choice.

“I wanted to write this to tell other women that the decision to have a mastectomy was not easy. But it is one I am very happy that I made. My chances of developing breast cancer have dropped from 87 percent to under 5 percent. I can tell my children that they don’t need to fear they will lose me to breast cancer,” she writes.

“They can see my small scars and that’s it. Everything else is just Mommy, the same as she always was. And they know that I love them and will do anything to be with them as long as I can. “

Time Magazine’s Jeffrey Kluger examines the effect that Jolie’s decision will have on other women in deciding if they should get tested for this faulty gene and have these preventative surgeries.

“Angelina Jolie has never lacked for influence,” he writes, saying that after she adopted a baby from Ethiopia, U.S. adoption agencies had twice as many families inquiring about also adopting Ethiopian orphans. After she named her kids Vivienne and Maddox, popularity of those names surged.

“So this week, when a woman known for her powerfully iconic beauty announced that she had undergone an elective double mastectomy to reduce her genetically high risk of breast cancer, it was a cultural and medical earthquake — a revelation so arresting it became the subject of Time’s newest cover story,” he writes.

Will this result in over-testing and over-worrying?

Kluger’s article does bring up an important question: Even though her decision was right for her given her family history of breast cancer, should more women be tested for the BRCA1 gene? Or can this just result in over-testing and over-worrying?

Jolie had the mutated BRCA1 gene which did put her risk of developing cancer high — but luckily, only a very small number of women carry this gene.

“Just over 1/10 of 1 percent of all women carry the same BRCA mutation Jolie has, and yet doctors expect a stampede of women requesting the test,” Kluger writes. “In the U.S., 36 percent of women who test positive opt for preventive mastectomy, but some doctors argue that regular MRIs and other screening tests may be sufficient to detect the disease, and that less radical procedures, like lumpectomies, may be sufficient to treat it if it does occur.”

Kluger warns that genetic testing is a “young science” and that while we are getting good at detecting the genes, we are not, however, as good at calculating the risks that these mutated genes bring with them. “Human beings are very good at worrying — it’s what keeps us alive and out of harm’s way. But we’re also good at over-worrying, making irreversible decisions to reduce or avoid risks that don’t really exist at all. Jolie’s brave example can make us all smarter and help keep us all healthier — but only if we take the right lessons from it,” Kluger writes.

Others would argue that an increase in women being tested for this gene is a great thing and that even if the majority test negative, those small number of women who do test positive can take the steps needed to stay healthy. “It is my hope that they, too, will be able to get gene tested, and that if they have a high risk they, too, will know that they have strong options,” Jolie writes in her op-ed piece. “Life comes with many challenges. The ones that should not scare us are the ones we can take on and take control of.”

Check out the full issue of Time Magazine covering The Angelina Effect on newsstands now.

What are your thoughts on The Angelina Effect?