Beginning on Jan. 1 2014, openly gay boys will be allowed to join the Boy Scouts. And while some feel that this change is a step in the right direction, the policy should extend to adults as well. 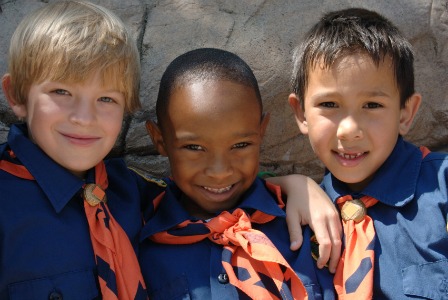 In a landmark vote, the Boy Scouts of America (BSA) has changed their long-standing policy that forbade openly gay boys membership in their organization.

Starting at the beginning of next year, boys will no longer be denied admission based on sexual orientation or preference alone. This is a huge change, and most feel it’s for the better — but since they didn’t address the ban on gay leaders and other adults in the organization, some feel that it’s simply not enough.

The BSA has been under scrutiny before based on their policy, most notably in 2012 when a mother was denied the ability to be a den leader because she is a lesbian. But the long-standing exclusionary policy prohibiting membership to openly gay members has been under fire for decades.

The just-released statement reads, “Today, following this review, the most comprehensive listening exercise in Scouting’s history the approximate 1,400 voting members of the Boy Scouts of America’s National Council approved a resolution to remove the restriction denying membership to youth on the basis of sexual orientation alone.”

The decision has been lauded by equal rights leaders and groups around the nation, while they also recognize the need for gay and lesbian adults to be included as well, they agree that the change is for the better.

Okay until you grow up?

Some parents we spoke with were happy with the decision but brought up the point that now the message is that being gay is okay until you grow up, so those who are Boy Scouts as children will not be able to participate as adults. “It’s really disappointing that they’re keeping the ban on gay leaders, especially since it perpetuates the false idea that homosexuals cannot be trusted with children, and also when a Boy Scout graduates out of the scouts he is all of a sudden no longer welcome in an organization that he has likely dedicated years to,” said Heather, mom of two.

Still more parents were thrilled that the change had been made and had hopes that the future would see elimination of the rule for adults involved in Boy Scouts.

“It’s a step in the right direction,” Charlene from New York told us. “The war is not over but a small battle has been won.”

Rachael, expecting her third child, felt the same. “One step at a time,” she told us. “I think they’ll lift this silly rule very shortly. Obviously, it’s not acceptable the way it is now, but it’s changing.”

The changes reflect growing acceptance of the LGBT community. George Takei, openly gay actor and proponent of gay rights, made the following statement on his Facebook page: “I hope and trust the next step for the organization is to lift the ban on LGBT scout leaders, and that this remaining rule is relegated soon to the dust heap of history.”

16 hrs ago
by Isobella Jade