What was on the minds and Twitter feeds of some of our favorite celebrity moms? Stylish mom Jennie Garth reveals her favorite budget-friendly spring essentials, while Denise Richards and Charlie Sheen share the co-parenting love via Twitter. Alyssa Milano and Hilary Duff round out our list of the top celebrity mommy tweets of the week. 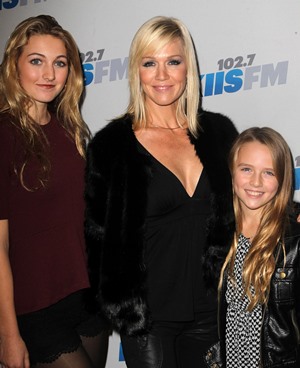 Many celebrities took to Twitter to show their support for the people affected by the devastating tornado in Oklahoma. “So grateful my OKC family is ok. My thoughts and healing energy to all there,” tweeted Jennie Garth.

It sounds like Garth, who has three daughters (Luca, Fiona and Lola) with her ex Peter Facinelli, may have a budding actress on her hands. “Just saw my baby in her 10th grade play. She actually lit up the stage with her beauty and grace. Ya…I’m a proud mama @LucaFacinelli,” tweeted Garth.

“Never too early for monkey bars #lovemymonkeygirl #justhanginaround,” she later wrote, with this photo of her adorable daughter Fiona playing at the park on the monkey bars.

“Check out my latest post on @retailmenot with deets on how I like to shop for my Spring essentials,” Garth tweeted, with a link to a post of her mommy style must-haves.

“I honestly don’t know how some of my fellow celebrities — with their $325 jeans and $325,000 cars — can sleep with themselves at night. Their spending is so over the top that I find them ridiculous. That may sound kind of harsh, but honestly, there’s no other word for it,” she wrote.

“So when I’m fortunate to come into extra money, I don’t spend obscene amounts of it on fashion. Like most other mothers, I spend it on my kids, or I sock it away for a rainy day. And I buy myself what I call common sense clothes, which meet three criteria: cute, comfy and affordable.”

This is just another reason why we love Jennie Garth! 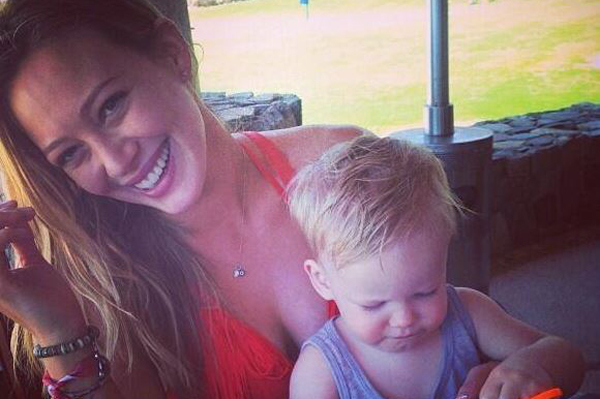 “Paparazzi at the park is WRONG! ALL kids should be able to play and not feel different than the others because weirdos r snapping pictures!” tweeted Hilary Duff, who has a 1 1/2-year-old son named Luca Crus with her husband Mike Comrie.

She later shared this adorable photo that her sister, Haylie Duff, took while they were having lunch.

In addition to taking care of her two children with her ex Charlie Sheen, Sam and Lola, and her adopted daughter Eloise, Denise Richards is also taking care of Sheen’s two sons (Max and Bob) while their mom Brooke Mueller is in rehab for prescription drug abuse.

It sounds like Sheen is showing his thanks to his ex-wife for her help by letting her use his private plane, of course! 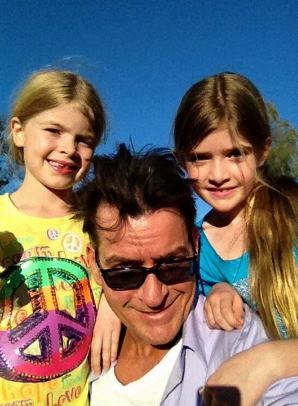 “Greatest ex @charliesheen my mom’s day gift flying me home on his plane so I can take the kids to school,” she tweeted “I’ve never had to work on Mom’s day…shooting exteriors for #Twisted #NY then home tonight! Made a stop at #FAO for toys for the kiddies.”

He also took to Twitter to defend Richards after many tabloids said the actress was looking too skinny.

“listen up sad, dooshy media STOP the inane reports of Denise’s weight! She’s SO healthy! this guy didn’t listen,” he tweeted, with a link to a (pretty creepy) photo of a man with a plastic bag around his head.

To also make her point that she is healthy, Richards tweeted a photo of a doughnut with the caption: “Yum! And yes I ate it….#craftservice #junkfoodonset.”

Also on her timeline? “Eloise getting her little toes done today at the party… ” she tweeted, with a cute photo of her pretty pedi.

Excited to see the former Charmed star back on TV? Milano is filming a new ABC show Mistresses. “I’m getting really excited for you guys to see #mistresses. I promise it is about so much more than the title implies,” she tweeted.

In the meantime, you can possibly expect to see Milano with another bun in the oven soon. “We’re not actively trying, but we’re not not trying, if that makes sense,” she told Us Weekly.