Beyoncé is reportedly pregnant with her second child with her husband, Jay-Z! What should the superstar name Blue Ivy’s sister or brother? 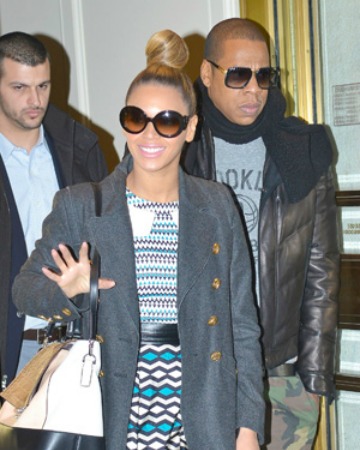 We have rounded up some cool picks Bey and Jay are sure to love.

After weeks of speculation, multiple sources have confirmed to E! News that Beyoncé and Jay-Z are expecting their second child together. The rumor mill started churning when Beyoncé hinted to ABC News recently that another child was in their future. She said that she “would like more children” and she thinks that her 1-1/2-year-old daughter Blue “needs some company.”

This week she canceled her show in Antwerp, Belgium, saying that doctors told her to rest and gave the good ole’ Hollywood excuse of “dehydration and exhaustion.” Even though Beyoncé hasn’t made an official announcement, both E! News and the New York Post are saying she is, in fact, preggers.

Which leads us to the obvious question: How will Bey and Jay find a baby name that rivals Blue Ivy Carter? We have a few suggestions in mind.

Sasha or Etta for a girl?

If Beyoncé has another baby girl, perhaps she will name her newest addition after her alter ego, Sasha Fierce, who she channels while on-stage? Although she did describe her stage persona Sasha as “too aggressive, too strong, too sassy [and] too sexy”… so maybe not.

She could also decide on a name of one of the amazing characters she has played, such as Deena (Dreamgirls), Etta (Cadillac Records) or Carmen (Carmen: A Hip Hopera).

The color blue obviously holds a special meaning for Bey and Jay, so perhaps they will choose a different shade of blue. Some cool options for boy and girl names include:

Beyoncé and Jay-Z reportedly gave their daughter the middle name of Ivy for its association with the Roman numeral 4 (IV), which is a special number for the couple. Beyoncé’s birthday is September 4, Jay-Z’s birthday is December 4 and they were married on April 4!

If they want to stick with names with “IV” they could consider Ivory or Ivette for a girl or Ivan for a boy. They could also follow in Victoria Beckham’s footsteps, who named her daughter Harper Seven, and simply choose “Four” as a middle name.

From Bonnie to Blaze: B baby names

Perhaps the couple will stick with the “B” baby name theme?

For boys, they may like Blaze, Baird, Balin or Bali. For girls, the name Bonnie could be a perfect choice. After all, they did meet while singing the song “Bonnie & Clyde.” Other unique options include Byana or Beatrix.

If Beyoncé has a baby boy, we can totally see Jay-Z wanting to name his son a name that starts with the letter “Z.” Some cool options for him to consider include:

What do you think Beyoncé and Jay-Z should name baby No. 2?