This week, the New York Post published a story about “rich Manhattan moms” allegedly hiring disabled tour guides in order to skip the lines at Walt Disney World theme parks. Clearly meant to rile readers up, the story did just that. 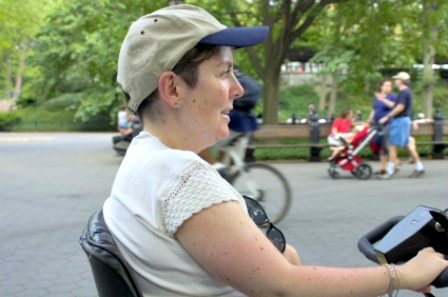 I felt a strong connection to this entire issue, because when my family visits the Disney theme parks, we use an accessibility pass. Here are my problems with the original story.

Whenever I pick up my family’s accessibility pass, I feel twinges of guilt. After all, there are thousands of other families at the park who won’t be able to take advantage of a quicker way to get on rides. However, Disney offers accessibility passes to kids on the autism spectrum for a reason. We’d never be able to visit the parks without the assistance and I’m grateful for it. And honestly? We’ve done our time waiting — hours upon hours spent in therapies and specialists’ waiting rooms. I hate that this story makes readers question those seen heading into the FastPass lane or waiting at a ride’s exit because of disabilities and special needs. My son with autism has had truly magical times at Disney thanks to the efforts they’ve made to promote accessibility.

Learn how to explain autism to curious children >>

The story is likely exaggerated

What these individuals and the tour company allegedly did may very well have happened, but it’s probably not the epidemic it’s made out to be. For one thing, Disney doesn’t whisk those in wheelchairs and scooters — or those carrying other types of accessibility passes — right onto rides. On many rides, an accessibility pass functions exactly like a FastPass. On others, guests are ushered to the exit, but it still takes time to get onto rides. I’m not saying it didn’t happen, but it’s no secret that there are people who will go to great lengths to get ahead. For example, according to The Wall Street Journal, bogus wheelchair use is a huge problem in airports across the United States.

Most people know right from wrong

There are always going to be selfish people making choices that put others at a disadvantage. But those people aren’t the majority. When it comes to the story of extremely wealthy people beating the system at Disney, it’s hard to find a shred of defense. “I think it’s wrong on so many levels,” says Blair in California. “What are you teaching your kids? Yes, the guides are in on it but it doesn’t make it right.” For those with significant disposable incomes, it’s possible to skip the lines without breaking the rules. Disney offers a variety of special VIP tours in addition to the existing FastPass system and Magic Hours that allow Disney resort guest to access various parks before and after regular hours.

It’s too often about “mom” as a villain

Ultimately, the New York Post tell-all was about entire families traveling to Disney with a “black market” tour guide in order to skip to the front of lines. But how was the story characterized? The moms were portrayed as the masterminds. “I think it’s a terrible practice,” says Jacquie from Connecticut, “but it bugged me that all the articles were about evil ‘moms’ rather than evil ‘parents.’” Regardless of how appalling the tour guide issue is, do we really need another expose focusing specifically on moms behaving badly?