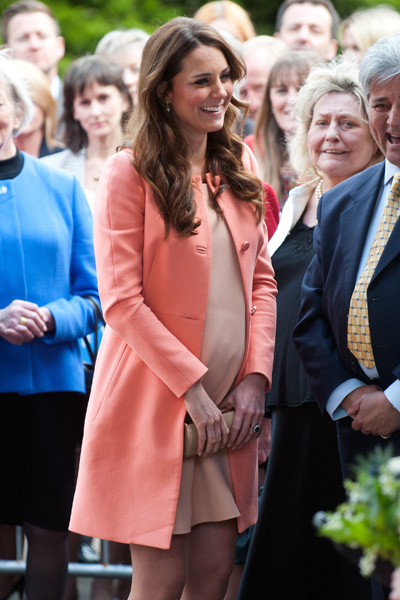 Pregnant Kate Middleton was glowing and gorgeous in a peach dress paired with a peach coat by Tara Jarmon. Middleton, who is now seven months pregnant, attended the Naomi House Children’s Hospice in England.

Even though we knew Kate’s due date was sometime in July, insiders are saying that her actualy due date has been revealed.

“Some of William’s closest pals were at a barbecue hosted by a family friend of the Royals recently,” a source told the U.K. Daily Mail. “They were all discussing the fact that Kate’s baby is due to be born on July 13.“

So now we know the possible due date — and the possible sex as Prince Harry reportedly let it slip that they are expecting a baby boy!

“Prince Harry has been telling everyone Will and Kate are having a boy and how thrilled he is at the prospect of having a little nephew,“ another “source” told the Sunday People. “He said the whole family was excited about it. Apparently Kate has always wanted a boy. The close inner circle all know that it’s a boy and they’re busily buying gifts with a boy theme. There will be an awful lot of blue in their house.“

The Royal spokesman is not confirming either one of these rumors however, so we will have to wait and see.

Next up: Pregnant Evan Rachel Wood cups her bump