Is it “normal” to friend your Mom on Facebook? Turns out, the United States ranks second worldwide in number of women older than 28 who are connected to a child on Facebook. But… are we doing it right? 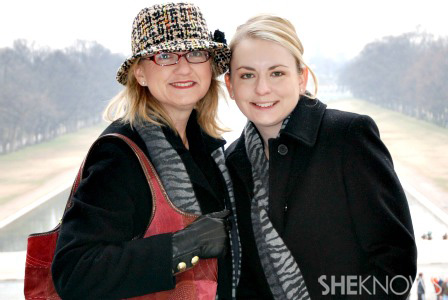 Mother-daughter relationships often encompass as many emotions as they span years, so it makes sense for that relationship to remain complex on even the simplest of platforms — Facebook.

Ah, Facebook. So frivolous and light. Until the day your mother-in-law friends you. Or, wait… do you friend your mother-in-law first? What’s the etiquette? What’s survival? Suddenly, the complexity of friending or accepting a friend request becomes an episode of “As the Stomach Turns.” With Mother’s Day on the brain, we decided to dig deeper.

“In real life” and online — it’s all the same

Laura Willard swore she’d never join Facebook. She scoffed at MySpace and thought social networking was for people with too much time on their hands. She held out until March 2009, a few weeks before she traveled to Ethiopia to adopt her second child. Even then, she justified it as “absolutely necessary” because she learned the internet connection in Ethiopia was anything but reliable.

“I finally caved because I wanted to be able to update friends and family quickly and in one place,” she says. “Once we were home, I found a lifeline to the outside world and a great place to get in touch with old friends and stay in touch with current ones. So I admitted it — I was a Facebook addict.”

Her mom Terry held fast to Laura’s old opinion that Facebook was a time-suck and plus, what kind of woman her age did that, anyway? Then Laura’s family moved to another state and Terry missed her grandchildren. A lot. Terry caved so she could see the way-too-frequent photos Laura posted and the next thing you know, she was all in. She joined with her daughter’s help, friended her and the rest is history.

“I loved seeing pictures of my grandkids every day. I missed them so much and Facebook made me feel like I was a part of their daily lives,” she said. “Facebook became the gift that keeps on giving. My daughter and her family didn’t seem so far away.”

Laura and her mom have a great relationship “IRL” and their Facebook relationship is just an extension of that. “I love that my mom is on Facebook,” Laura says. “She is so supportive, funny, involved but not overbearing, and positive. We live 10 minutes apart from each other now, but nothing has changed on Facebook! Sometimes she even messages me at 1:00 a.m. to ask me what I’m still doing awake! Once a mom, always a mom — even on Facebook.”

“My mother already knows how foolish I am, and while I suspect my daughter knows too, I don’t want her to have any concrete evidence against me,” Kate explains.

Jane, 39, who requested a pseudonym since her mother’s presence on Facebook is a good indication she can Google things, too, admits: “It took me a really long time to accept [my mom’s] friend request so I could figure out how to block her if I needed to. But honestly, I have clients that I’m friends with so I try to not have stuff on there that is totally over the top.”

Beth lives in North Carolina, while her mom lives in Florida. “I like that my mom is on Facebook!” Beth says. “She gets to see the pictures I post of my kids, and gets in on the posts about fun or funny happenings of our lives. She’s 600 miles away, so it’s as if she has a window into our regular daily lives.”

“I also like that she posts about things other than us kids. It shows me more about her as a person, as opposed to her as my mom.”

Friends… but not really

As idyllic as Beth’s experience sounds, sometimes a Facebook friendship among family is just a bad idea.

“My mom is passive-aggressive and extremely nosy,” says Libby, who has three children. “I can’t stand that we are friends on Facebook. She is in constant competition with the other grandmas of my children and has to comment on everything to insert herself.”

After enduring such a sour relationship, will Libby repeat the pattern with her own daughter? “You’d better believe I will be neck deep in [her] business!” Libby proclaims.

Well, that was embarrassing

Where mothers and daughters mingle, embarrassment, cringes and eye covering is bound to follow (on both sides).

Marilyn (remember, she’s friends with both her daughter and her granddaughter, who aren’t friends themselves) concedes her girls’ posts actually haven’t shocked her. In fact, “[I] very much suspect that I am the one who has done the shocking. Wild, politically incorrect opinions and something about ‘camel-toe.'” Cue Kate’s cringe.

Interestingly, Kate says, “I only cringe a little when my mother rants about political or religious issues. But all in all, I’m sure most of the cringing between us is caused by me.”

Marilyn and Kate are both friends with Ana, their daughter- and sister-in-law, respectively. Ana (31) is mom to three of the cutest, most photogenic children on the planet, so being friended by her extended family was inescapable.

Ana admits she hesitated before accepting Marilyn’s friend request but quickly remembered her own life “is boring.” In fact, her mother-in-law’s life turned out to be the more titillating one. “I vaguely remember seeing something about Fifty Shades of Grey on her page,” Ana recalls. “I quickly blocked it out of my mind.” 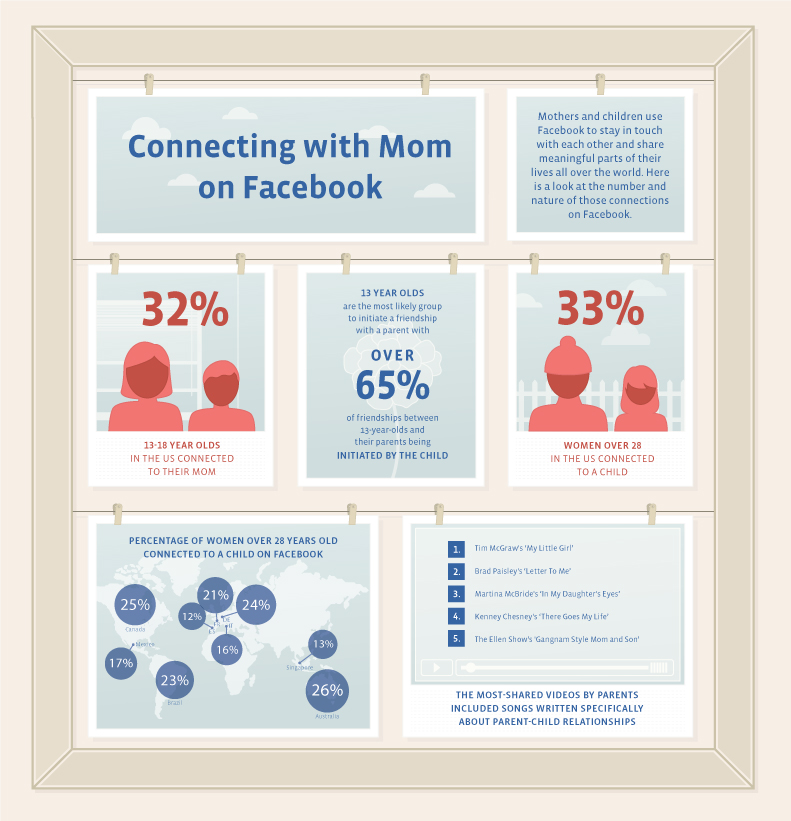 Facebook reports 13 percent of survey respondents plan to wish their mom a Happy Mother’s Day via Facebook. Kate says she wasn’t necessarily planning on it until becoming part of a story with that statistic. “I guess now I have to!”

Marilyn indicates she’d rather receive a phone call (and this writer infers perhaps Kate and Ana need to answer their phones). “Facebook and chats have replaced phone calls… but not all together!” Marilyn insists, adding: “Doesn’t anyone answer phones anymore?”

In the same breath: “Wait… what if my grandmother didn’t want to be Facebook friends with me?”