Happy Wednesday Hump Day — also known to us as Celebrity Baby Bump Day! We have rounded up the cutest pregnant celebrities of the week, including Ali Landry, who was photographed getting her baby bump blessed by Pope Francis! Pregnant Kim Kardashian wore a controversial floral dress to the Met Gala, while newly pregnant Jaime King also got glammed up for the Met Gala. Lastly, pregnant Halle Berry and Jessica Simpson kept their maternity look cool and casual while traveling. 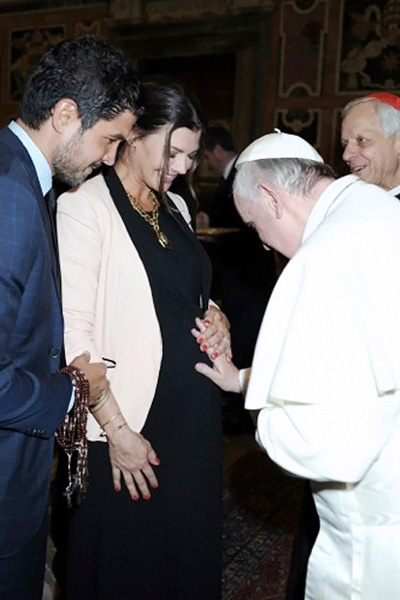 “We had an opportunity to have a private audience with the Pope and meet him one-on-one!” she wrote on Twitter. “Words cannot describe the overwhelming sense of gratitude I have for this experience for my baby and for my family.”

So, what do you wear to get blessed by the Pope? Landry looked fab in the Isabella Oliver Gathered Detail Maternity Maxi Dress (IsabellaOliver.com, $215) in Caviar Black.

Landry, who is also known as the “Doritos Girl” was previously married to Mario Lopez. However, she had that marriage annulled after she learned of his infidelity. She has since moved on and is around six months pregnant with her third child. She and Alejandro are parents to 5-year-old Estela and 18-month-old Marcelo.