Fans of Disney’s Brave have hailed Princess Merida as a unique, adventurous and strong girl who fought to make change in her own life instead of waiting for someone to do it for her. Her inclusion in the Disney Princess line, however, has disappointed many fans and parents because Disney gave her a makeover. 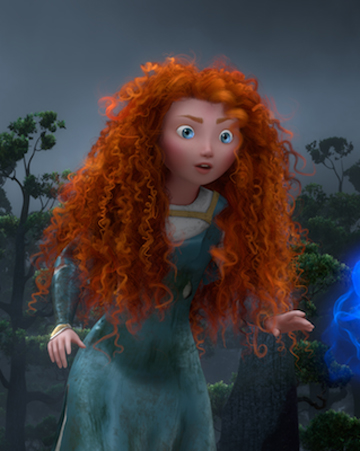 Merida appears skinnier, more mature and sexier. Do you think Merida was perfect the way she was, or is the “upgrade” no big deal? 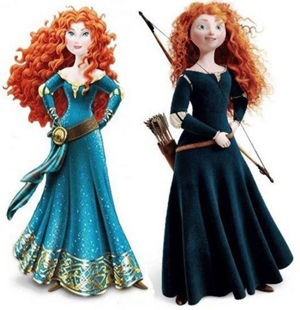 Merida from Disney and Pixar’s Academy Award-winning film Brave is a Scottish princess who doesn’t have much of an interest in becoming the proper royal lady her mother wishes her to be. She strives to make her own way in life and has been admired by fans (big and little alike) for being a strong female character that isn’t picture perfect — in other words, she looks like a real girl. Disney has announced that she will be part of its Disney Princess line, but fans are crying foul after Disney revealed that the new Princess Merida is slimmer, sexier and curvier than the movie shows her to be.

Carolyn Danckaert, co-founder of A Mighty Girl, decided to start a petition on Change.org just three days ago objecting to Merida’s redesign. “By redesigning her to fit the mold of the Disney Princess line and making her skinnier, sexier and more mature in her appearance, Disney is sending the message that for girls and women to have value — to be recognized as true princesses — they must conform to this narrow definition of beauty,” she explained. The petition already has more than 16,000 signatures and looks to gain even more momentum in the coming days.

Most of the moms we spoke to felt that the change to Merida’s appearance was disappointing and gave the wrong message to young children. Molly, mom of a 4-year-old, said, “She was perfect the way she was. The changes are ridiculous and confusing to young fans. Audrey said, ‘She looks weird!’ when I showed her the new picture.”

Jackee, mom of one, felt the same way. “Why does she need eyeliner on, a lower-cut dress and a smaller waist?” she asked. “To show young girls that this is how a 16-year-old should look? They took away what made her such a great, relatable character in the first place.”

Others pointed out that Merida herself would likely object to the makeover, as she disliked fancy dress and was not enthused with looking like a royal lady. “Merida’s refusal to ‘fit in’ was the whole point of the movie,” remembered Brittney, mom of two. “I think the makeover is absurd.”

Jessica from Canada agreed. “That’s not cool, but I am not surprised,” she said. “Really, when will they get a grip on these unrealistic bodies?!”

Not a huge deal

We didn’t find many who weren’t opposed to the redesign, but one mom felt it wasn’t an issue all. “People make such a big deal over stupid things,” said Ashley, mom of three. “I won’t be losing any sleep over what Merida looks like. I don’t think little girls will even notice much.”

The petition is making so much progress it won’t be much longer before it reaches its desired number of respondents (25,000), and then Disney will receive the request to return Merida to her original form — as a Brave princess unencumbered by traditional notions of beauty.

GoldieBlox: Engineering toys for girls
5 Steps to boosting your daughter’s self-esteem
Raising a girl to be more than pretty