Thanks to YouTube, bored teens everywhere can share their latest pranks with the world — and hope they go viral. The latest prank is milk smashing, and bored teens are taking to grocery stores and big box stores and leaving with cell phone video to share. 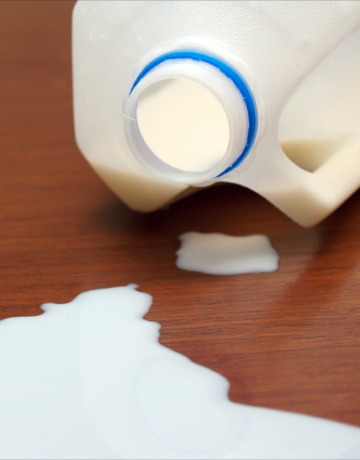 What are they doing, and what’s the big deal?

Milk smashing is the latest teen prank to invade YouTube — and it may be coming to a grocery store near you. What is this crazy prank, and why are officials annoyed?

The scene opens with a teen walking through the aisles of a grocery or convenience store, swinging a gallon jug of milk in each hand. Suddenly the containers are slammed on the floor, sending milk spilling all over the place. In the fashion of the old slip-and-fall trick, the teen then flings himself into the puddle of milk and waits for an innocent onlooker to “help” him to his feet. Friends record the video so the star of the show can post to YouTube and earn his 15 minutes of fame.

An ABC News report says this prank can be traced back to an original group of teens in Northern Virginia, whose milk smashing video on YouTube gained over three million views before being taken down. The original video of this prank is quite theatrical and dramatic, unlike many of the subsequent attempts at the prank.

Having trouble understanding your teen’s behavior? >>

A prank, or vandalism?

Called either milk smashing or gallon smashing, this prank has taken over YouTube and caused chaos — and a huge mess — at numerous grocery stores. Police and store managers are not amused and in some cases, charges will be filed against the pranksters.

In Buffalo, New York, store managers at Tops Markets in Erie County saw six incidents of milk smashing in a one-week period during March of this year. Wegmans stores in the same area had three incidents during the same period. While the teens think they are just pranking and having a good time, don’t expect the same response from store managers.

“It’s a prank. However, we don’t find it to be amusing,” said Shaun Frank, who is an asset protection manager for Wegmans in Buffalo. “We consider it a crime.” Stores who have these pranks pulled in their aisles are reporting that not only is there clean up involved, but destruction of products on the shelves due to the milk splashing. Damages can add up to several hundred dollars quite easily, not to mention the potential danger of someone slipping in the milk who isn’t involved in the actual prank. This has grocery store officials concerned, for obvious reasons.

“This is destructive behavior. It’s potentially dangerous. It could lead to associate and customer injury. We are taking the matter very seriously,” says Katie McKenna, a spokeswoman for Tops Markets. The possibility of an unsuspecting customer being injured in the silliness of this prank makes store managers take this seriously.

Check out this milk smashing video

The salt and ice challenge: Don’t let your teen get burned
Popularity of inhaling nitrous oxide is a dangerous trend
Parents be aware: Dangerous teen trends