We polled our readers to find out what’s true and what’s not about the “typical” American family.

We polled our readers to find out what’s true and what’s not about the “typical” American family.

To give you an idea who answered our survey, 64 percent of respondents are married, 26 percent are single and 10 percent are partnered. We wanted to know all about you and your family — your kids, your spouses and partners, and your extended families. 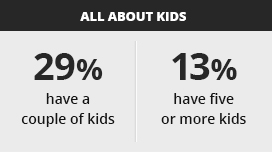 It seems two is still the standard number of children these days — 29 percent of you have a couple of kids. Perhaps more surprising, 13 percent have five or more kids.

While it’s said that moms are having kids at an older age these days, a whopping 44 percent of you had your first child when you were between 19 and 29. Nineteen percent of you first became a parent in your 30s, and just 2 percent in your 40s.

When it comes to discipline…

Sixty-nine percent of you say that both you and your spouse (or partner) discipline your kids. What method(s) of discipline to you prefer?

We asked, “What is your biggest fear when it comes to your kids?” Many of you are concerned about bullying, drugs, sexual predators and unplanned pregnancy. Here are some of the other interesting responses.

“I worry that my daughter will never have a ‘normal’ life due to her disabled brother.”

“I fear that they won’t have enough of a sense of self to pursue their own dreams.”

“I’m hoping they have a wonderful life and marriage like I am having — over 60 years of marriage!”

“I worry about providing for her for college. As a single parent with a limited income, I try to save but it is hard.”

“My biggest fear is they won’t find what makes them happy in life, whether it’s the right spouse or career.”

25 percent are single and the sole income earner.

26 percent are married (or partnered) and stay at home.

6 percent are married (or partnered) and are the sole income earner.

Your relationship with your spouse or partner was also a concern for 40 percent of you.

Almost 66 percent of you say it’s “very important” for families to eat meals together, but are you really doing it? 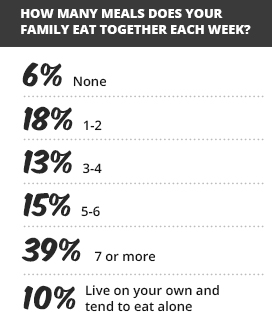 The most important meal of the day?

We always hear that breakfast is the most important meal of the day, but only 25 percent of you eat “very healthy” breakfasts.

When it comes to grab ‘n go breakfasts, many of you are reaching for fruit, granola bars, muffins or yogurt.

Live right next door to your parents – 71 percent

Live on the opposite side of the country – 29 percent

Fifty-five percent of you do (or would) drink alcohol in front of your kids, while 39 percent say they swear in front of their children.

We asked you to tell us something you once did that wasn’t so nice to a family member.

Here are some of the shocking confessions. 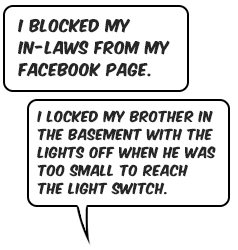 “I dared a cousin to touch an electric fence (when we were kids).”

“I stopped speaking to my brother at least 10 years ago over something he did to me.”

“I once told my sister that we couldn’t be friends (socially) because I didn’t think she was cool enough.”

“I told my mother she couldn’t live with us anymore because her personal and health issues were getting in the way of me caring for my daughter.”

“I tell people my brother is an alcoholic without ever confronting him about it first.”

We asked, “Which of the following feelings have you experienced, even once?”

I wish I could have more kids

I’m single and wish I was married

I wish I’d had my kids with a different person

I wish I didn’t have kids

I have a favorite child

I’m married and wish I wasn’t

I wish my kid was the opposite gender

Sixty-seven percent of you say you sometimes gossip about your family with other family members. Eighteen percent say you do it all the time!

What would it take for you to disown a family member?

“It would have to be a big situation that involved repeated disrespect and hateful behavior.”

“We already put up with a lot of drama in our family (at least it feels like it to me) and we still love each other.”

“My dad cheated on my mom once. If he did it again, I wouldn’t speak with him again.”

“If they won the lottery and they said nothing.”

“We have had to disown a family member — due to violence, abuse, mental instability and alcoholism.”

“I had to make that choice with my father and his wife. I was tired of always being hurt, so it was easier to choose to end contact.”

“Not sure there is anything that would make me “disown” them. They may be nutty, but they are mine.”

Brought to you by Silk Fruit & Protein