When posting photos of our kids, what one mom finds cute, others may find indecent or even criminal. Where do you draw the line when you post photos of your kids? 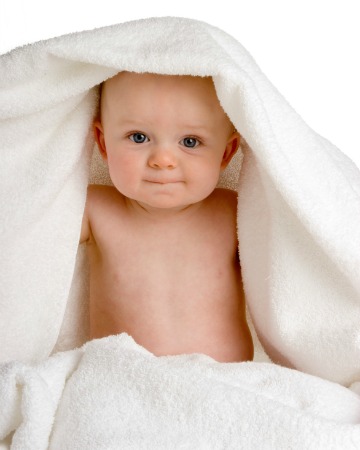 We talk with moms who have been under fire for posting too much, and others who think that kids are best pictured covered up when it comes to the internet.

There are so many adorable shots of naked babies out there, from photos of us on a blanket when we were newborns ourselves to modern shots of naked children having fun outdoors. Where do you, or should you, draw the line when it comes to posting nude photos of your kids on the internet? Moms — and experts — weigh in.

Many parents feel that nude child photos are best left off the internet — period. Reasons vary from future embarrassment of the child to dire warnings about child pornographers who stalk the internet and the potential for use and abuse of the photos for nefarious deeds.

In a worst-case scenario, it may open you and your children up for real-life stalking, kidnapping or other personal crimes, especially if it’s on social media websites such as Facebook — where people know who you are and where you live.

Jenn is pregnant with her first child and feels that naked baby or child photos do not belong on the internet. “While I completely disagree with the idea that a naked photo of a child is somehow shameful or disgusting, unfortunately we’re at a place in society where what we choose to share with our friends and family on the internet is not solely limited to those people,” she explained. “Pictures can get into the wrong hands, so I plan to take caution when posting photos of my baby.”

Some moms have been singled out for posting what others feel are “too much” in the baby butt department. Facebook, for example, will remove photos that have been reported that show any nudity at all — even an innocent newborn butt photo. Amanda, mom of four, has been chastised for posting photos of her youngest child playing outside naked, even though it was a butt-only shot. And another mom has had countless trouble with her own personal blog with family members demanding that she take down nude photos of her kids. “I’ve been told I was a child pornographer,” she told us.

Experts urge parents to use caution when it comes to sharing potentially sensitive photographs of their children on the internet. They remind us that photo technicians are often trained to spot anything that looks like it can be child pornography, which is a federal crime in the United States and in many other countries. There are cases of families being investigated or children taken away due to these charges — not a risk any parent would want to take.

Meaghan Fitzgerald, head of marketing for 23 Snaps, explained that parents should not only consider nudity when sharing photos, but other details as well. “Avoid photos that include street signs, identifiable local landmarks, house numbers or recognizable school uniforms,” she said. She also suggested that parents give photos to family members that are easy to share, such as those that have the child’s face slightly obscured, where they are fully clothed and that lack identifying details.

Pamela McMurty, artist and author, believes that nude photos of kids should be taken with caution, and never shared. “Modesty is not only a virtue but a protection,” she shared. “These days children are under siege, vulnerable to being objectified (as women have been in art for centuries) and deserve any protection we can give them.”

More on kids and photography