We have rounded up our favorite celebrity moms that graced the covers of magazines for April and May. Gwyneth Paltrow talked Botox on Harper’s Bazaar, while Adele was honored in Elle. Kim Kardashian chatted Kanye West to Cosmopolitan, while celebrity moms Elizabeth Banks and Isla Fisher complete our list this month. 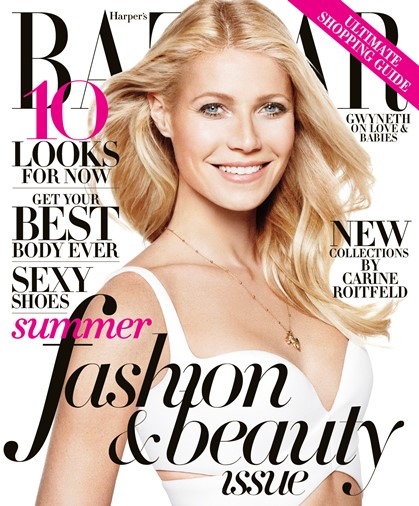 Gwyneth Paltrow wowed in a white Balenciaga by Nicolas Ghesquière bustier ($5,950) on the May 2013 cover of Harper’s Bazaar magazine, on newsstands now. The 40-year-old actress and mom of Apple and Moses opened up about her milestone birthday — and Botox!

On moving back to California from London:

“Just to have my kids be in the sun every day—picking avocados, going for a swim. Even for two years or something, and come back when they go to senior school.”

“I’m at quite a pivotal point: Do I want to go back more into films? Do I want another child? Do I want to move back to the States? You can call me a lot of things, but you can’t call me complacent!”

On her favorite skincare products:

“I really used to be bad with products, but now I exfoliate every night and use a lot of organic oils on my face. And I have a great dermatologist in L.A. who gave me this amazing laser the last time I was there. It’s called Thermage. It’s not invasive. I went out to dinner right afterward and I didn’t look crazy, but it’s quite painful. It feels like someone’s smacking your face with a rubber band that has an electric shock in it. But I would do it again, because I feel like it took five years off my face.”

On plastic surgery and Botox:

“I’ve probably tried everything. I would be scared to go under the knife, but you know, talk to me when I’m 50. I’ll try anything. Except I won’t do Botox again, because I looked crazy. I looked like Joan Rivers!”

On having more kids:

Next up: Adele is amazing in Elle magazine