Janet Roberts, a mom of four in Jacksonville, Florida, was stunned when her then 11-year-old daughter’s stomach kept growing while the rest of her body remained slim. Her daughter’s middle school peers taunted her for looking pregnant. But after denials, several negative pregnancy tests, doctor visits and a trip to a different hospital, doctors finally discovered it wasn’t a baby growing in her belly — it was a massive tumor.

by Janet Roberts
as told to Julie Weingarden Dubin

In April 2012, I noticed my daughter, Ja’Larrica — who was 11 at the time — had bit of a belly, but it was not very noticeable and she didn’t complain of any pain.

Some of Ja’Larrica’s classmates saw her stomach and they started making fun of her and telling her she looked pregnant. Also, the teachers pointed at her on the playground while looking at her stomach. Pregnancy rumors spread in our neighborhood and kids were picking on her and asking her why she was so skinny with a big stomach. Some parents even stopped letting their kids be around Ja’Larrica.

At the end of April, I was called to a meeting at school about a rumor going around that Ja’Larrica was pregnant. When we left that meeting I had Ja’Larrica take a pregnancy test. It was negative. In May, I got another a call from the school nurse that on the day before Ja’Larrica almost fainted in gym and couldn’t run the four laps so I took her to the doctor for a pregnancy test to prove that she wasn’t pregnant. The test was negative but Ja’Larrica’s stomach was a little bigger.

What’s wrong with my child? 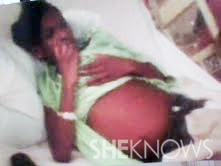 By the end of May, I took Ja’Larrica to a clinic to back up what I had been telling the school and then in June I took her to the hospital because she complained that her stomach hurt. I just wanted her to get checked out. The doctors did an X-ray and felt her stomach. The X-ray showed nothing.

That night, I couldn’t sleep and when I looked at my child I could sense that something wasn’t right. Why was she so tired? Why was she so little with this big stomach? I wanted answers, so I took her to another doctor for blood work. When we went back for her blood results at the end of July, I told them to explain to me why her stomach had gotten so big since the last appointment.

The doctors were alarmed because Ja’Larrica looked like a child from Africa with this huge belly. I saw their panic and felt like finally somebody started to listen to me. They told me the next day she had to go to Wolfson Children’s Hospital for an ultrasound. The results showed a tumor. She had emergency surgery to remove a 19-pound benign tumor. It had to be drained five times in 2-liter bottles just to remove it and her organs were starting to shut down. 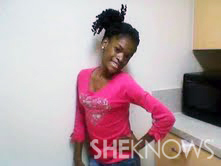 Today, Ja’Larrica is doing well. She has to go to a lot of appointments, but even though she lost her left ovary, her body has bounced back — including any organs affected by the tumor.

The teasing didn’t stop until her surgery. A lot of people actually think I made her have an abortion. When the kids in our neighborhood found out that she wasn’t lying, they apologized for what they did and when she started to get a small again, the kids at school were shocked by her transformation.

This experience changed me and taught me to never just leave something alone when your heart tells you different — keep investigating until you get the answers. Being a mom has taught me to voice my opinions and ask more questions and continue to be that mom who doesn’t give up easily. I hope my kids learn to tell the truth no matter what and to be a positive role model to others.

Keep your faith and pray through the hard times. Know that you’ll be stronger and there are always people going through something worse.

12 hrs ago
by Kim Grundy