Jenn McNary, mom of six, started an online campaign to plea for the U.S. Food and Drug Administration (FDA) to quickly approve a life-saving drug that only one son has access to — both boys have Duchenne muscular dystrophy (DMD), a degenerative muscle disease. The fact that the Saxtons River, Vermont-based mom already met with senior agency officials at the FDA shows the power of a mother’s determination and love.

by Jenn McNary
as told to Julie Weingarden Dubin

My sons, Austin and Max Leclaire, have a deadly disease. Austin (14 years old) and Max (11 years old) have Duchenne muscular dystrophy (DMD), a terminal progressive muscle-wasting disease that affects primarily boys. Most children are in power wheelchairs by age 12 and require breathing assistance by their teens — generally the life expectancy is in the early 20s. Those afflicted die paralyzed without the ability to eat, breathe or move on their own. There is currently no treatment on the market. 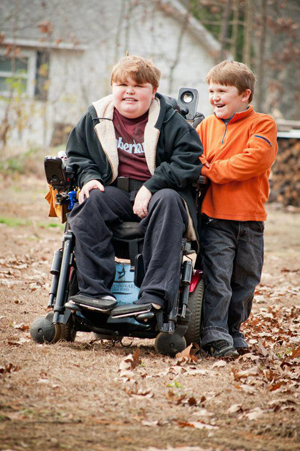 In the summer of 2011, Max was eligible for a medical trial for Eteplirsen, a new drug that seems to stop the progression of the disease. Max has been on Eteplirsen for over 86 weeks now. Before the drug he was falling a lot, and beginning to depend on his manual wheelchair most of the day to get around. Now Max is very much like a normal 11-year-old. He can run, jump, climb and play, and he doesn’t fall at all anymore. Kids with Duchenne always get worse, but Max and the other boys on the trial have gotten better or stabilized. This drug is life-changing and groundbreaking — the first drug of its kind to change the underlying mechanism of the disease, and give these kids a much better quality of life.

When Austin was 10 he became completely non-ambulatory and he wasn’t included in the clinical trial for Eteplirsen because they required that children be able to complete a six-minute walking test in order to qualify. Austin is beginning to lose function in his upper body and requires assistance with even minor daily tasks such as cutting his food, getting a drink and dressing himself. Duchenne is a progressive disease, so every day he loses a little more function. 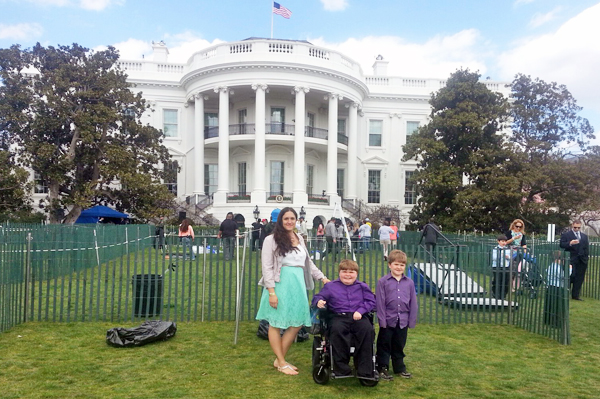 Every minute counts and I’m busy with the nonprofit DMD Hero, which I founded in October with my husband, Craig McNary, to help move promising new drugs to DMD patients faster and more efficiently, through advocacy and awareness.

We were also contacted by change.org — the world’s largest petition platform — five months ago, and launched an urgent campaign. Our petition said, “FDA please approve the medicine my boys need to survive — both of my sons deserve to live.” The petition was aimed at the FDA to ask them to consider Eteplirsen for accelerated approval. Change.org has been instrumental in getting our voices heard in Washington and in supporting us in our quest to get an audience with the FDA.

We’ve had three very positive meetings with the FDA in the past few months. We’ve felt very encouraged that the FDA is listening and is very interested in moving new and innovative treatments to the patients that need them, as fast as possible. I believe that accelerated approval will happen.

I believe our story resonates with people, whether they have children or not and whether touched by Duchenne or not. At the end of the day we’re talking about a family cut down the middle, with one son thriving and the other son literally dying while waiting for the life-saving drug. It’s painful and raw and I don’t think there is a person in the world who doesn’t feel for Austin as he waits for his turn.

I’ve become a person who is afraid of very little, who will talk to anyone or do anything if it will help my children. Being a mother of children with a terminal illness just makes you that much more brave and persistent. I hope my kids have learned to advocate for themselves, to stand up for what is right or what they believe in. I hope they’ve learned that everyone can make a difference, and that there are some really kind and dedicated people out there working very hard to help them.

Surround yourself with people who support and empower you, and genuinely want to help in whatever ways you need. A strong team to lean on when things get hard is the most valuable thing you can have.