One of the most difficult conversations you will ever have as a parent is if your child tells you he or she is gay. Once it’s out in the open, how do you move forward and help your child? 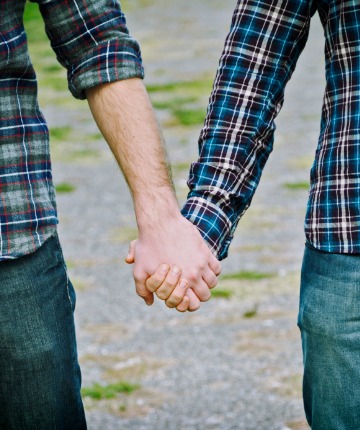 We rounded up some resources to help you — and your whole family.

Whether you have always suspected or are caught completely off-guard, finding out that your child is gay can be difficult for a parent. You want to support him or her, but may not have a clue where to begin. We spoke to moms with children who are gay to ask about their experience.

Brooke Benschoter’s daughter Sarah came out when she was a junior in high school. “What helped was having an open mind and listening,” she shares. “At first, I had to keep saying in my head over and over ‘she is still my daughter no matter what.’ I told her I had a lot of questions and then I asked them in a non-judgmental way over time — not in the first 24 hours,” she says.

“I have a 13-year-old son who came out to his father and me two years ago,“ shares Tammie Hardy. “My son is in middle school and we have not had any issues with bullying. He has friends and is a well-adjusted and confident young man. His extended family members all know… and all love him just the way he his.” She shares that the Louisville Youth Group — which caters to young lesbian, gay, bisexual and transgender youth — has been an amazing place for her son to go and meet other teens like him.

Read more about talking to kids about homosexuality >>

Jill Ann Joubert remembers, “When my oldest son finally came out (we really knew since he was a toddler), he had already lined up support. He had already been in touch with our local chapter of PFLAG (Parents, Friends and Family of Lesbians and Gays) and had friends and an uncle ready to help him if needed.”

They attended the next PFLAG meeting with him and did whatever they could to show their son they supported him.

“Of course as a mom I worried about his safety and how his established community of friends would treat him,” she shares. She worried for no reason. “They were awesome. Kenny started a Gay/Straight Alliance at his high school and when there was a meeting to determine if it should be allowed, he had a group of friends who stood up for him against many angry parents. He got the alliance,” she adds. When Joubert’s second son came out in his junior year of high school, she was more concerned for him. “He wasn’t as comfortable as his brother. I think he had a harder time worrying about his friends’ reactions,” she shares.

Jen Brown, R.N. works in the adolescent medicine department at Seattle Children’s Hospital and contributes to Teenology 101, the hospital’s blog for parents of teens. She wrote a series of posts to help parents deal with finding out their child is gay. She offers advice for parents on how to respond lovingly and honestly. “Sometimes the news comes as a shock, sometimes parents are unsurprised,” says Brown. ”But even parents who have no qualms at the idea of having a gay child usually have some feelings to work through. You may feel fine with their sexual orientation, but what about the rest of the world?”

Brown suggests a big hug for starters, no matter what you are feeling as a parent. “They’ve been working up to this for a long time, and they’re coming out to you because you’re important to them and they care about you knowing who they truly are,” she says. Share your concerns with your teen if you must, but it’s important to get the message through to him that nothing will change your love for him.

From mom to mom

We asked Joubert for her advice for parents. “My advice to parents just finding out would be to not overreact. Let your child know that you love them unconditionally,” she says. “Find support through PFLAG or your church or someone that you know who is gay or has gay children.” She is a part of the Parents Reconciling Network, which helps parents of gay children. “If you are really having an issue dealing with it, find someone to talk to but don’t give up on your kids. Nothing has changed. They have just shared the most vulnerable part of themselves with you,” she adds.

Discussing sex and birth control with your teen
Is your sex talk sinking in with your teen?
Sex facts: Clueless teens are getting pregnant