What were on the minds and Twitter feeds of some of our favorite celebrity moms this week? Gwyneth Paltrow tweets a selfie photo with Demi Lovato, while Ivanka Trump confirms her pregnancy news. Kourtney Kardashian tweets a photo of her cute casual mommy style, while Snooki sets the record straight on her post-baby weight loss. 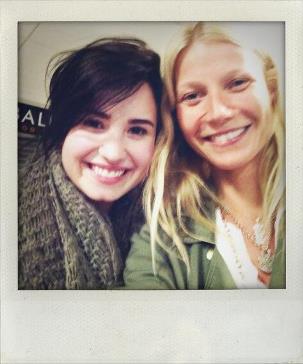 It sounds like Gwyneth Paltrow’s 8-year-old daughter Apple is a huge fan of Demi Lovato!

Paltrow ran into Lovato at the airport lounge in New York City — and the two happened to be wearing almost identical outfits, including jeans, brown short boots, white tees and green jackets.

“@ddlovato Apple! Check out who was on my flight!” tweeted Paltrow, who included this photo of the two smiling together.

“So nice to meet you!! “ Lovato tweeted back.

Lovato later told Good Morning America that she plans on releasing her new album on Apple’s birthday. “May 14…Happy Birthday Apple,” she said.

It sure pays to have friends in high places!

“Jared and I and are so excited that Arabella will become a big sister this fall. Thanks for all your good wishes! xo Ivanka,” tweeted Ivanka Trump, confirming the rumors that she and her husband Jared Kushner are expecting their second child together.

The 31-year-old mom works as the executive vice president of development and acquisitions at daddy Donald Trumps’ corporation. The mom-to-be tweeted this cute photo of her and 1-1/2-year-old daughter Arabella Rose on an airplane ride. 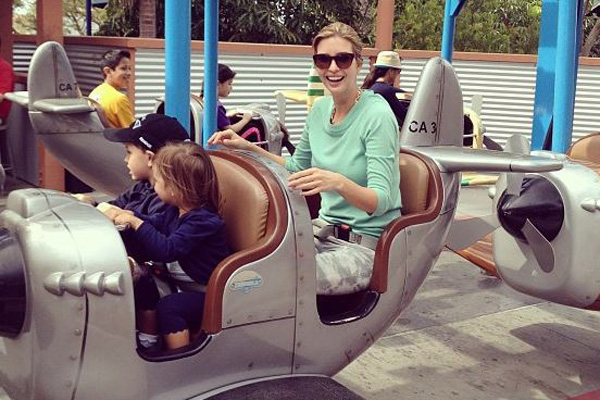 “I had more fun than the kids did at #legoland!” she tweeted, with this photo of her riding one of the rides. 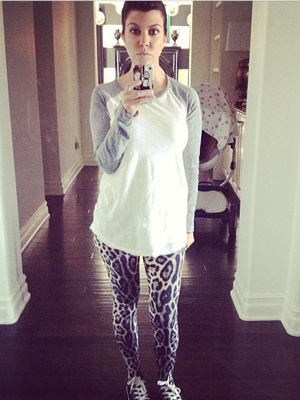 Pick up these leggings at Sears.com for only $17.>>

Not only is Kourtney’s sister Kim Kardashian pregnant, but apparently all her friends are, too! Is there something in the water?

“Back to back baby showers!” she tweeted, with a link to her website with a photo of her wearing a shift dress.

“Kim and I had two baby showers on Saturday so I picked her up so we could go together!” she wrote. “First stop was Cecconi’s for one of our best friends since 9th grades baby shower. She is having her third baby and her shower was charming and perfect! Next stop was Bagatelle for Monica’s baby number two shower! Lots of girls having lots of fun with a side of banana pancakes.”

Kourtney K. wasn’t the only one tweeting about her favorite mommy outfits. 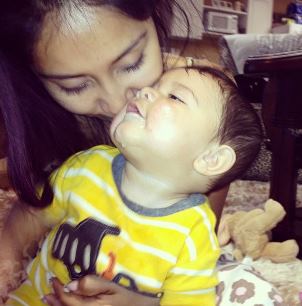 “My life,“ she later wrote, with this photo of her snuggling her cute baby boy Lorenzo.

The Jersey Shore star has been proud about losing 42 pounds since giving birth to her son Lorenzo last August, however Star magazine quotes a source as saying she is starving herself.

“Most of her calories come from booze, and she uses laxatives too. It’s scary. She looks emaciated, and everyone is worried sick,” the magazine quotes a source saying.

“Star mag, shame on u for that RIDICULOUS article. I literally worked my ass off in the gym for my toned, HEALTHY body. Get ur facts right,” Snooki tweeted.