Morning sickness is inconvenient for some pregnant women, and a major medical problem for others. The degree of intensity varies from mom to mom, and some have sought medication to help them get through the worst of it. 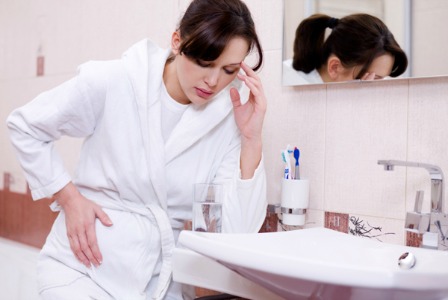 The FDA has, for the first time in 50 years, approved a drug specifically for treating morning sickness. Now that they have given the green light, will you be requesting some if you suffer from morning sickness?

You’re pregnant, you throw up. It’s a basic fact of pregnancy, albeit a pretty depressing one. Some moms don’t suffer much at all, while others throw up so much they wind up in the hospital because they are dehydrated and unable to keep anything down. There is big news for those who suffer from morning sickness, however — the FDA has approved a medication called Diclegis for nausea and vomiting during pregnancy. This is the first time a medication has had such an approval in the United States in 50 long years, and it will be available this June.

Taking medication during pregnancy, however, is a delicate business — you have to ensure that there will be no harm to the embryo or fetus. But if a mother is sick enough, you have to weigh the benefits of the drug against the risks. Morning sickness is tricky to treat because it generally affects mothers in the early part of their pregnancy, when the baby is forming its organs, bones and other structures.

Diclegis is a combination medication comprised of pyridoxine and doxylamine, which amounts to vitamin B6 combined with an antihistamine. It is currently sold in Canada under the brand name Diclectin. This particular medication is even more interesting because it was on the market several decades ago in the U.S. under the name Bendectin, but it was withdrawn in 1983 due to a flurry of lawsuits from mothers who claimed their babies had been harmed by the medication. The company didn’t have the money to fight the claims so it took the drug off the market instead, despite the fact that multiple studies had found no direct evidence that the drug would harm an embryo or fetus.

Many moms we spoke with felt that this was excellent news. Quite a few reported that they were prescribed other medication for severe morning sickness, such as Phenergan or Zofran, neither which have been specifically approved for use during pregnancy.

“I couldn’t have functioned without it, let alone taken care of my toddler,” shared Brittney, who was prescribed Zofran during her second pregnancy. “I lost so much weight early on in that pregnancy that I was still down 5 pounds the day I delivered, even with the Zofran. I’d hate to think how horrible it would have been without it.”

Heather, a mom living in Canada, agreed that the benefits outweigh any potential risks. “I do take Diclectin twice a day to control my morning sickness,” she explained. “I would be miserable if I didn’t have this drug to help me through my pregnancies. I would also likely only have one child if I had to endure 40 weeks of violent vomiting.”

Other moms felt that any medication — particularly during the early part of a pregnancy — should be an absolute last resort. Manda, pregnant with her first child, has been experiencing debilitating nausea and vomiting. She’s only nine weeks pregnant so she wanted to go over her options with her midwife.

“I almost asked for a morning sickness medication today… but I’m really trying to go for an all-natural birth and the talk with my midwife and change of diet changed my mind,” she told us. “After seeing my little one move on the screen today, I decided I don’t want to put anything in my body that I am unsure of the risks just to make myself feel better.”

For some moms, it doesn’t seem like they have much of a choice — they have older children to tend to, little help in the home or a job they have to be present for. Your care provider may give you options, such as a different prenatal vitamin, before resorting to medication. But with this news, now they have a new choice that they didn’t have before, and with years of use by Canadian women behind them, it may be the best option.

3 hrs ago
by Kelli Thompson