A federal judge has ordered the FDA to allow the morning-after pill to be sold without a prescription to anyone who wants it — including your young teenage daughter. Where do you stand on the issue?

Related story Is Your Teen Ready to Date? Here's How to Know 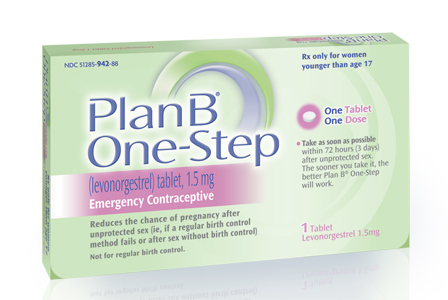 The morning-after pill, also known as Plan B, is back in the news again after a federal judge in Brooklyn, New York has ordered the Food and Drug Administration to improve availability of the drug by allowing it to be sold unrestricted over the counter. While reproductive rights advocates are rejoicing, others consider it a bad idea. Where do you draw the line?

The morning-after pill is considered emergency contraception. In the event of a birth control failure or lack of use, or in cases of rape, a woman can take this medication within 72 hours and drastically reduce the chances that she will become pregnant. It works by preventing ovulation. In the case that fertilization has already taken place, it may not affect implantation — but if implantation has taken place, it will not interfere with development of the embryo or fetus.

Currently, the medication is available without a prescription, but you must be over age 17 or 18 to legally purchase it from a pharmacist. This leaves younger teens in the dust, requiring them to inform their parents or guardians that they have a need for it so they can get a prescription — which is often understandably a scary thing to do. Instead of going to Mom and Dad, they hope for the best, and often have an unplanned, unwanted pregnancy to deal with as a result.

Most parents we spoke with felt that lifting the age restriction benefits those who need it most.

“The people who need the morning-after pill the most, people whose lives would be most negatively impacted by a pregnancy (teenagers, people unable to financially care for a child, etc.) are those who are least likely to seek a prescription for it, either because they’re afraid to ask their parents or because they do not have the resources or health insurance to get the prescription,” said Heather, mother of two.

Cristina from California agreed. “It’s about time, I say,” she told us. “It’s a no-brainer as far as I’m concerned.”

Others felt that such a medication being available to minors was a step in the wrong direction. “Birth control pills and Plan B are serious drugs with a lot of potential side effects,” said Brent, a commenter on the CNN article.

“People act as if we’re talking about multi-vitamins. Making Plan B OTC is especially dangerous since people would be buying them at a very vulnerable time and they may not be thinking through things clearly.”

Rachael, pregnant with her third child, felt that an age limit was indeed a good thing. “My first thought is, I wouldn’t want my 12-year-old taking this without my knowledge, simply because of side effects,” she explained. “But if it’s $50, chances are my 12-year-old wouldn’t be able to get it without my knowledge. I certainly think it should be available without a script, but I also think there should be an age limit — and under that should be parental consent needed.”

Nancy Northup, president and CEO of the Center for Reproductive Rights, said that the ruling could mean greater access in around 30 days. “Today science has finally prevailed over politics,” she said in a statement. “This landmark court decision has struck a huge blow to the deep-seated discrimination that has for too long denied women access to a full range of safe and effective birth control methods.”

The ultimate guide to puberty
Understanding your teen’s nutritional needs
Should you let your teen tan?