The force was strong with Tori Spelling as she threw her son a Star Wars-themed birthday party for his 6th birthday. From the Darth Vader cake to the party favors, flip through all the photos to plan your own Jedi-approved birthday bash. 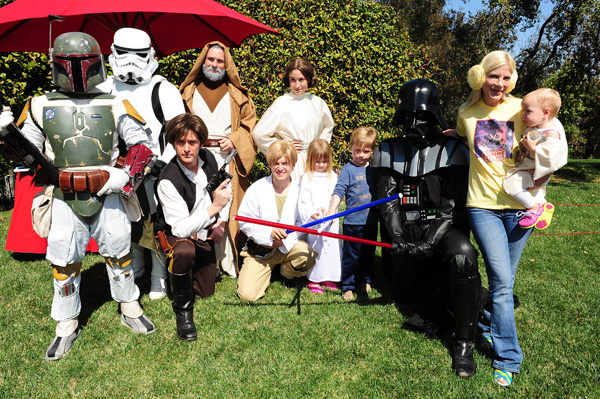 Tori Spelling got the entire family in on the fun as they dressed in Star Wars attire for Liam’s 6th birthday party on March 16. Spelling (wearing yellow yarn Princess Leia buns!) enlisted the help of a cast of actors dressed as Star Wars characters, while Liam’s siblings — 4-year-old Stella, 16-month-old Hattie and 7-month-old Finn (not shown in this picture) — had fun dressing up as well.

“As I’m sure you all know by now, my little guy Liam isn’t so little anymore. He’s got a handsome new haircut and just turned 6,” the Tori & Dean star wrote on her website. “Last week we celebrated his birthday with a family outing to Chucky Cheese, and a few days ago Liam had his Star Wars birthday party with all of his classmates. “

Spelling’s husband, Dean McDermott, and his older son from a previous relationship were missing from the party.

“We were so worried and sad that big bro Jack and Dean weren’t at the party… unfortunately Jack broke his nose right before the party started. They were both missed greatly!” Spelling explained.

Ready to get the party started? From the Darth Vader cake to the Jedi training and cool Crocs party favors, click through all the photos!

11 hrs ago
by Shanon Lee

12 hrs ago
by Shanon Lee

16 hrs ago
by Shanon Lee