Being on television has been an opportunity for new mom Dr. Jennifer Arnold to spread awareness about life with disabilities. She and her husband, Bill, recently adopted a little boy. 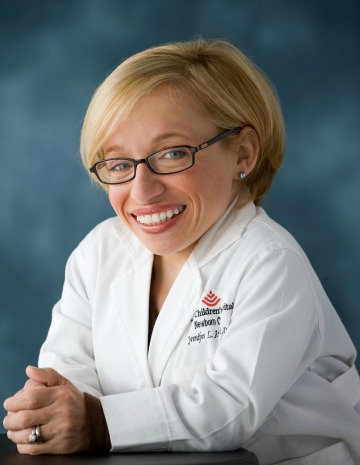 Her show, The Little Couple on TLC, returns April 30.

Dr. Jennifer Arnold, co-star of TLC’s The Little Couple, is a new mommy. She and her husband recently adopted a little boy. “We are thrilled to announce that we have adopted a beautiful young boy from China,” the couple told People magazine in a statement. “We are so proud to welcome William to our family and look forward to bringing him home.”

Celebrities who became parents through adoption >>

Arnold recently spoke with SheKnows about her path to motherhood and her passion for children’s health.

The road to motherhood

Arnold’s road to motherhood hasn’t been an easy one. After the couple’s surrogate became pregnant, she suffered a miscarriage, which was documented on her show. “I think at the time, I was very nervous about sharing our experience with others on the show. For the most part what Bill made me realize was that this was an opportunity to share something we didn’t really plan on,” says Arnold.

Since then, she’s heard from other women who had been through miscarriages as well. “There are so many others out there who are dealing with fertility struggles. The opportunity to raise awareness has been a tremendous value,” Arnold says.

Arnold and her husband explored all possible routes toward motherhood. “We were pretty open from the beginning for all options,” she explains. “From the beginning we wanted to adopt a little person.”

Their 3-year-old son has a form of dwarfism, reports People.

She advises other women who want to be moms not to give up. “I think the best piece of advice is to not give up and also be open to ways of having a family that you don’t expect,” says Arnold. “I think in the end what I keep learning from other people is that you look back and it doesn’t matter how you got there but that you got there.”

Arnold says that while she and her husband have become a little recognizable, being on reality television hasn’t changed their lives much. “We still work full time,” Arnold laughs. “Sometimes they film me at work which I love.”

The couple signed on for the show, wanting to raise awareness about life with disabilities, something that remains their focus.

At work, Arnold says that sometimes patients feel like they already know her, “which is actually a great benefit.”

Arnold, a neonatologist, is also an advocate for Cord Blood Registry. “I think many families and even myself as a neonatologist really don’t know a lot of information,” says Arnold, who is passionate about raising awareness about why cord blood banking matters.

She says that cord blood isn’t just for stem cell therapies, but can also be used in the treatment of other things including autism, cerebral palsy and hearing loss, which is still in the trial phase. “That’s what’s kind of exciting. My biggest thing is that we need to raise awareness so more research can be done,” Arnold says.

Cord blood can be donated, and for kids with certain risk factors, may be eligible for free private storage as well.

14 hrs ago
by Michelle Maffei