You may know him best as that smoldering hottie on Private Practice, but Taye Diggs is so much more than an on-screen doctor. With the show now over, he’s looking to the future with his family and doing some good for others as well. 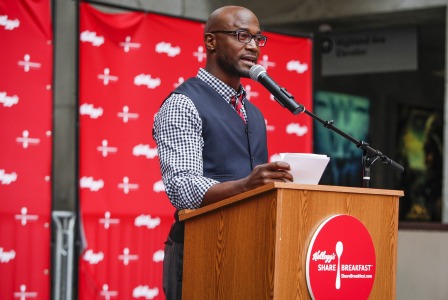 Taye Diggs has teamed up with Kellogg’s and Action for Healthy Kids in the third annual Kellogg’s Share Breakfast campaign. The goal? To share one million breakfasts with kids in need — a cause that’s near and dear to Diggs’ heart. He’s appearing in a PSA, hosting events and narrating videos to spread the word about this important cause.

“We’re trying to put an end to childhood hunger. Something like 1 in 5 kids don’t have access to breakfast,” says Diggs.

This is important to Diggs, because he’s been there. “From personal experience growing up, we didn’t have a lot of money. I remember days when I had to go to school without a lot to eat,” he shares. He says that impacted his ability to focus in school as well as his attitude — and so much more. 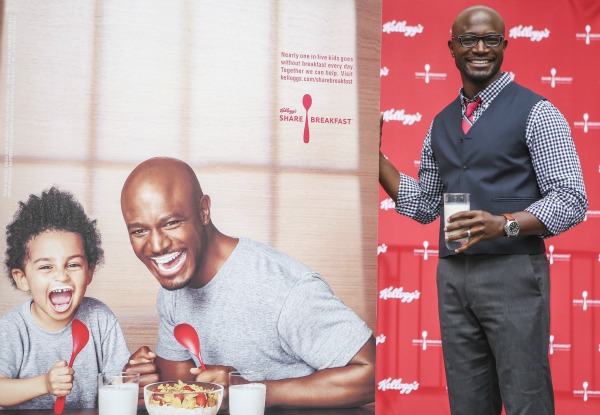 As a father, Diggs knows that making sure children eat enough is so, so important. “My kid is three but the days where he doesn’t eat as much as he should you can immediately tell,” says Diggs.

Breakfast time is big in his house. “For us, breakfast isn’t just a great way to start the day, but it’s a way to connect,” says Diggs, who loves starting the day off as a family. “It’s also just a time for us to bond.”

Though weekdays are fast and easy breakfasts, Diggs and his wife go all out on Sundays. His son will “be up and at ’em while we are slowly waking. We will give him some cold cereal in a bowl as an appetizer while we are getting the big breakfast prepared,” says Diggs.

Besides breakfast, Diggs likes to bond with his son over sports and learning. They use the iPad for learning games and watching videos on YouTube.

“Whenever there’s a screen involved we make sure we are participating as well,” says Diggs, who sees it as an “opportunity for us to share a moment.”

Their current favorite for videos? Animals. Diggs says that his son is really into jungle animals right now. “He’s going through an animal kick. We’ll ask him ‘what does a hippo sound like?’ then we’ll look it up on the computer,” says Diggs.

Though Diggs has played a dad as an actor before, becoming one for real is an entirely different experience. He says he was most surprised by how it felt.

“Up to the point where Walker was born I only knew love in the terms of my family and my life and I didn’t think I had the capacity to love more,” says Diggs. “I didn’t know how vulnerable I would feel either. He means so much to me and the fact that I can’t protect him 24 hours a day makes you feel vulnerable and weak.”

4 hrs ago
by Monica Beyer

Brie Bella Reveals Her ‘Big Failing Moment As A Mother’