How many times have you thought wow, I wish someone would invent [fill in the blank]? Meet three parents who fulfilled a need for their children with special needs through creative means. 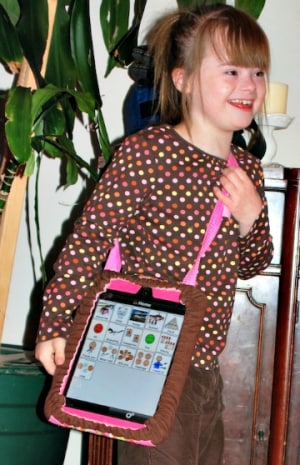 Lori Holbrook’s daughter, Hannah, has Down syndrome, autism and apraxia of speech. In 2010, she began using an iPad as a communication device.

“This was a very exciting time for us to have this amazing device, but I never could find anything that allowed her to carry her iPad easily and functionally,” Lori shares. “Every bag out there had to be unbuttoned, unzipped or unvelcroed and was not functional or easy for Hannah.”

Lori sketched out an idea that would give Hannah a bag that exposed the screen at all times, with adjustable straps and a fun, cool fabric. CHAT Bag went online in January 2012 and has sold to families nationwide and in four countries.

The name CHAT Bag originated because “Hannah had her iPad to CHAT with us. At first CHAT stood for Children Have A Tool. Later in 2012, we decided to change it to a more universal logo/acronym because not just special needs individuals were using CHAT Bags. Now the acronym stands for “Communication Has A Tool.”

“CHAT Bags are all hand-made in the U.S. by family and friends,” Lori shares proudly. “There is a lot of TLC that goes into making each bag.” 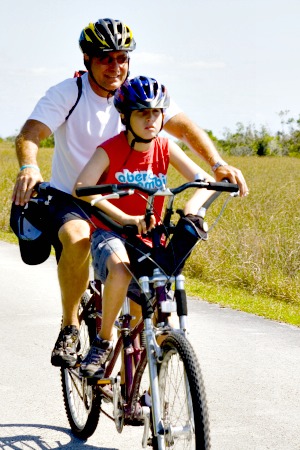 It’s inevitable — every kid wants a bike. But sometimes children with special needs might not be able to go it alone. The Buddy Bike offers a unique tandem bike-riding experience by placing the smaller rider in the front seat while the rear rider controls the steering. Most other cycling options seat the smaller rider in the back, which can be too risky with a child with special needs.

Barry Nelson, the father of a child with autism, began searching for a bicycle to use with his son Jesse, who wasn’t able to ride by himself or behind his father on a traditional tandem bike. Barry purchased a used “Love Bike,” the bike’s original name.

“As Jesse and I enjoyed the bike and received so many smiling looks along the way, I began to think about the many parents and children who could benefit from this design,” Barry explains on the company’s website.

“I contacted the inventor, Robert Gardner, offered to purchase the patent, and in 2005 a Special Needs Irrevocable Trust for the benefit of Jesse (Jesse’s Trust) purchased the rights to the patent for the bicycle as well as the remaining inventory.” The Buddy Bike was born. 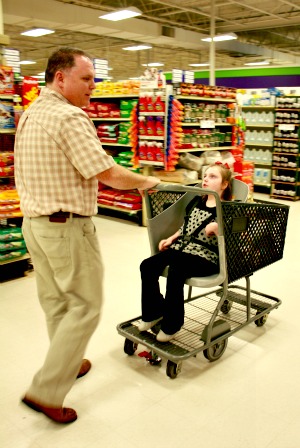 When Caroline was small, any shopping cart worked. “As she grew older and bigger, it was clear that I would soon have to find another option because she would no longer fit in the cart.”

Pushing both Caroline in a wheelchair and a grocery cart at the same time didn’t work, so Drew’s only options were to find a sitter for Caroline, bring someone to push her wheelchair or take Caroline shopping with her and only purchase what she could carry while pushing the wheelchair.

“Eventually, my frustration turned to innovation,” Drew explains. “This was started on a cocktail napkin at my kitchen table,” she shares. “I knew I was onto something when I went public with my idea and prototype on Facebook.”

Drew has simple but powerful advice for other parents with an idea. “Do your research and never give up!”