Facebook has opened up a whole new question of privacy for your student. A teacher was recently reprimanded for posting pictures on Facebook of her students with their mouths duct taped and a caption reading, “Finally found a way to get them to be quiet!” 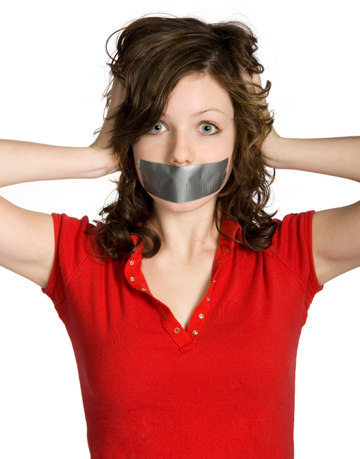 As a parent, what do you think about this? We spoke to some moms and teachers.

Melissa Cairns felt she had an excellent rapport with her seventh and eighth grade math students. She didn’t think twice when one of her students took a piece of duct tape to fix her binder — and instead put it over her mouth as a joke. What transpired next would make parents furious — and have 33-year-old Cairns fighting for her teaching job at an Akron, Ohio middle school.

After one of Cairn’s students taped her own mouth shut with duct tape as a joke, other students quickly joined in, encouraging Cairns to take a photo. Thinking she could share the photo with only her friends, Cairns then posted the photo on her personal Facebook page with the caption, “Finally found a way to get them to be quiet!” She meant it to be a joke, but now regrets posting it to Facebook. She has been teaching in the district since 2007, and feels that student’s ability to joke with her is an indication of their trust in her as a teacher. Instead, she wound up fighting the school board for her job.

How do parents feel about this? Alicia, a mother of two, has concerns about a teacher sharing pictures on her personal Facebook page.

“This is not something you should make light of and most definitely not in this manner on Facebook for all to see,” she says. “I think it shows immaturity of the teacher and insensitivity to the classroom issues and the child.” Many parents prefer to make the decision about which pictures of their child wind up on the internet, and feel that this level of privacy violation goes beyond what’s acceptable.

“I wouldn’t be happy if the teacher posted any pictures of my kids on her Facebook page,” shares Cheryl, mother of three. “They post them on the class website but Facebook just opens up an entirely different can of privacy worms.” The idea that your child’s pictures could be posted without your knowledge is what bothers many moms the most. Add in the nature of this particular Facebook post, and you won’t find a lot of support for what Cairns did. 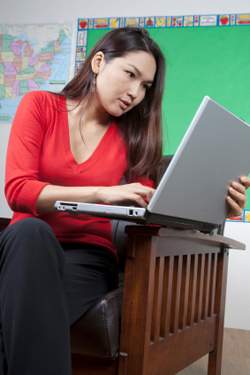 Julie has a bit more of a relaxed stance on the issue. “I think it would absolutely depend on the person who posted it,” she shares. “Everyone’s sense of humor and reputation and discretion is different. I wouldn’t automatically be upset if it was someone whose presence on Facebook was always humorous and good-natured,” she says. “I am quick to give people the benefit of the doubt and would examine the intention, first and foremost.” Julie is a former teacher herself, and can easily see both sides of this issue.

Galit is a writer, former teacher and mother of three. “I was at first more worried about the intent,” she shares about the Facebook posting. “After looking it up, the kids duct taped themselves copycat style and asked for the picture, and the teacher went with it. I can so see that happening! The teacher was quoted saying that it showed how comfortable the kids were around her and I agree! That rapport is so very important, especially in middle school,” she adds. With the ever-changing face of social media, school districts may have to implement guidelines for teachers and school employees.

With Facebook invading most of our daily lives, many teachers have their own policy regarding Facebook. One elementary teacher we spoke to shared, “My rule is that I am not friends with children (except relatives) until they graduate from high school. My rule on parents [of students] is that I will be Facebook friends once their kids are gone [from school].“

He says that the exception to that rule is when he’s already had friends as “real” friends before they had children attending his school. “I have found that Facebook has been really nice in getting reacquainted with students I had years ago,” he adds. Many of the teachers we spoke to enjoy the interaction with former students who are now grown and on their own.

One fourth grade teacher we spoke to has much the same opinion regarding Facebook. “I am not friends with any students and am only friends with parents that are my friends outside of school,” shared one long-time teacher. “I would never post pictures of any of my students. I feel it is a violation of their privacy and I am not interested in mixing my school life with my personal life. I will occasionally post something like, ‘Had a great field trip with my fourth graders today!’ I would never name a student,” she adds.

Another fourth grade teacher we spoke with also takes a strong approach. “I am not friends with any students or children on Facebook,” she says. “I think one of the main reasons is to protect my own children. I post pictures of my kids on Facebook that they may not necessarily want other kids their age or younger to see. I don’t think I would post photos of my current students unless I know the parents personally,” she adds. “It makes me nervous to do so.”

Facebook blurs the line between what is an acceptable “friendship” and what crosses the line. Teachers have the right to set boundaries about their Facebook sharing — and parents should have the right to know when images of their child are used online by someone they trust. Rather than punishing each teacher as these issues are uncovered, maybe some simple rules and guidelines should be in place in school districts.

More about your child online