What were on the minds and Twitter feeds of our favorite celebrity moms? Pregnant Holly Madison tweets that she is planning on eating her placenta after birth, while Amber Rose writes about breastfeeding woes with her baby “Bash.” Kendra Wilkinson tweets about Celebrity Wife Swap with Kate Gosselin, while “stepmom” LeAnn Rimes rounds out our list of top celebrity mom tweets. 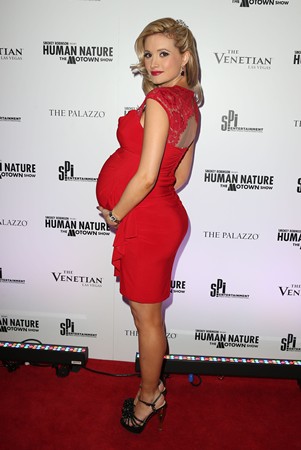 “What I plan on doing with my placenta after giving birth,” tweeted Holly Madison, who included a link to a photo of placenta pills. “Would love other moms’ input!”

“This might sound gross, but I’m totally planning on having my placenta turned into pills I can take after giving birth,” she wrote on her blog. “I heard it helps women recover faster and I want to recover as quickly as I can! Have any other moms out there done this?”

In addition to placenta planning, Madison, who is expecting her first child (a girl!) with her boyfriend, is finishing up decorating her baby nursery. “Yup, still decorating and painting at 9 months pregnant!” she tweeted.

The Playboy star showed off her baby bump in this radiant red dress — and shared her fashion details.

“Lady in red!” she tweeted.

“Here I am at the Human Nature opening at the Venetian,” she wrote on her site. ”I wore a red Cache dress and fun Charlotte Olympia heels, and I went for Old Hollywood hair and makeup.”

Amber Rose announced the birth of her first child with her boyfriend, rapper Wiz Khalifa.

“Happy Birthday to our baby boy Sebastian “The Bash” Taylor Thomaz! I’m so happy u guys I fell in love all over again!” she tweeted.

“I wanna thank my Rosebuds & Rosestuds 4 holdin it down during my pregnancy Sebastian has so many bros & sisters in u guys I luv u all,” she continued. “We can’t stop staring at Sebastian he’s beautiful!!! He’s the perfect mixture btw me & Wiz. He has Wiz’s Lips & my round head.”

Also on her timeline? “Man breastfeeding is awesome…. It kinda hurts tho but the bonding with my baby is unbelievable. So worth it” she wrote.

Rose and Wiz retweeted congrats from many famous friends, including Rihanna, who tweeted:

Sean “Diddy” Combs even sent the couple flowers! Rose tweeted a photo of the bouquet and wrote:

“Sebastian says ‘Thanks Uncle Diddy!’ Lol @iamdiddy they are beautiful thank u so much. Hugs.” 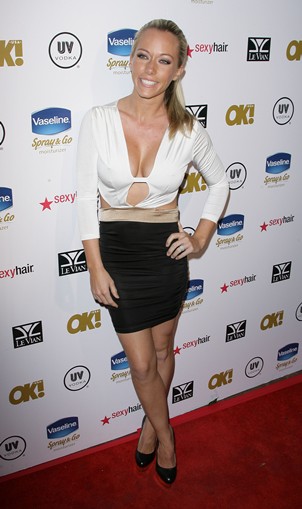 In case you missed it, Kendra Wilkinson and Kate Gosselin swapped lives on this week’s Celebrity Wife Swap! Kendra was filmed taking care of Kate’s eight kids, while Kate was enjoying a nice vacation taking care of Kendra’s son, Hank.

“I was honestly really excited when I realized I was swapping with@Kateplusmy8. I’ve always really liked and respected her,” tweeted Kendra.

“It was a longggg week lol! Kate and I are different but I respect her for sure. Happy I did it but happy to be home with my Hanks! #WifeSwap,” she wrote.

Kendra’s husband, Hank Baskett, also had fun on the show — especially when Kate, who uses the twitter handle @kateplusmy8, asked if he had a brother!

“My brother just told me he was bombarded all day at work bc of@kateplusmy8 askin on #WifeSwap if I had a brother. #hilarious,” tweeted Hank.

So did this whole experience make Kendra want to have another baby?

“A little brother for Lil Hank? Hmmm…” she tweeted, with a link to her website that showed a photo of a tabloid magazine that said that Kendra was ready to get pregnant again.

“People are always talking about us having another baby, and sometimes it gets a little ridiculous. But only Hank and I know what our REAL plans are,” she wrote.

LeAnn Rimes is undoubtedly having a difficult time dealing with all the press surrounding her husband’s ex-wife, Brandi Glanville, and her tell-all book, Drinking and Tweeting: And Other Brandi Blunders.

Rimes is a stepmom to Glanville and Eddie Cibrian’s two sons and she retweeted the following quotes from Heather H (@CafeSMom), who is a parenting blogger that writes about stepfamilies:

“Lord, help me to be a good stepmother… give me the patience of a saint, the strength of an ox, and the skin of a rhinoceros.”

“As a mom, I’m not threatened if another woman calls my four kids hers. Words don’t change DNA they communicate she cares about them.”