We’re not sure whether we should cringe at this sign of our times or be thrilled that someone finally put this idea into production, but either way, the iPotty has arrived and we’re pretty sure it’s here to stay. 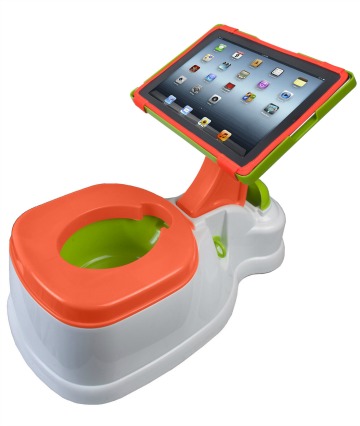 This training toilet with an iPad dock attached has been getting a lot of buzz since its debut at the Consumer Electronics Show in early 2013 and while we’re still on the fence, we’re also not writing it off yet! Our biggest question… does our iPad warranty cover urine?

Parents who attended the Consumer Electronics Show in early 2013 were all talking about the same product… the iPotty. With a mix of “can you believe this” and “this is awesome” posts and initial reviews, the iPotty is coming to a store near you on or around March 1, 2013. Designed by tech-accessory company, CTA Digital, the iPotty features all of the standards you’d expect from a training toilet — an inner bowl for easy cleaning, a splashguard for minimizing mess and a design that was created to fit children as young as 18 months comfortably.

What it also has? A 360-degree rotating case that lets your little potty trainer switch from horizontal to vertical iPad viewing, as well as an iPad stand that has three different positions to “comfortably fit each child’s level and preference” (Amazon.com) and naturally, a clear screen protector that snaps around the back of the iPad to prevent “smudges and little messy accidents.” We’ll leave it at that.

All in all, if you’re looking for a training toilet that also allows your child to play on an iPad, this design has everything, with the exception of the iPad itself. They’ve even thought to include a cover that turns the potty seat into a regular seat, so that kids can use it as more than just a toilet. At just under $40 (Amazon.com), the iPotty is more expensive than most training potties on the market, but it’s likely that the price will come down, post-launch.

While at first, a toilet with an iPad attached may seem ridiculous, most moms who have potty trained a child or two know that sometimes, the biggest challenge is keeping their little one on the toilet long enough to actually go.

With an iPad at their fingertips and water in a sippy cup, the iPotty could very well be the key to potty-training success for some kids.

On the flipside of the toilet seat, having your child make the connection between going potty and using the iPad is a dangerous one to make, especially if you’re already having a hard time battling your little one about iPad screen time. We know that at times, potty training brings out the most desperate moments in parenthood, but try looking at the long-term road before you combine these two worlds. Losing the battle, but winning the war? That probably applies in this case.

What parents are saying

When we asked a few parents who are in the midst of the potty-training years what they thought about the iPotty, there were a lot of laughs and a few curious expressions, as if they were trying to find the missing link between an iPad and a toilet. Parents of potty-training boys in particular had concerns that they might miss the toilet because of bad aim and hit the iPad instead. Other parents admitted to using their iPad on the toilet themselves (names withheld, for obvious reasons), so they could see why using it to help aid in potty training would be a good idea.

The verdict, for the majority of moms and dads we chatted with about the iPotty, was that if you were having trouble keeping your little one sitting on the toilet long enough to make any potty-training progress, the iPotty could be a reasonable next step. But, they all wrote it off as an initial potty-training tool.

Would you use an iPotty to help potty train your child?