What were on the minds and Twitter feeds of our favorite celebrity moms? Kim Kardashian tweeted that she loved Jennifer Lopez’s Grammy look, while Pink shared a “weird” photo of her daughter Willow — staring at her mom’s image on a billboard. Jenny McCarthy tweets about hiring a hot nanny, while mom-of-four Tori Spelling is dreaming she is pregnant again! 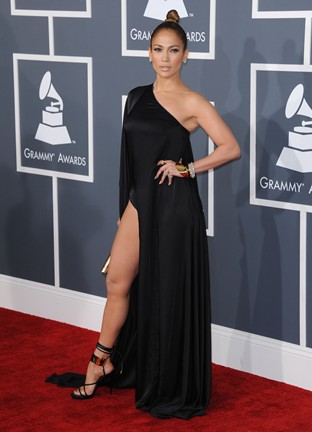 Jennifer Lopez got mixed reviews for her black Anthony Vaccarello dress (and her Angelina Jolie-like leg thrust) at the Grammy Awards this year, but pregnant Kim Kardashian loved her look!

“Thank you girl! Missed you at the #GRAMMYS congrats to@kanyewest,” Lopez tweeted back her congrats to Kanye for winning three Grammys. However, Kim and Kanye missed the awards show as they were vacationing in Brazil.

Lopez has twins, Max and Emme, with her ex-husband Marc Anthony.

Pregnant Kim Kardashian took to Twitter to clear up rumors that she is leaving her reality show, Keeping Up with the Kardashians, after a magazine article quoted her as implying she wouldn’t be on the E! reality show much longer.

“Regarding my Dujour interview and ‘Keeping up with the Kardashians’,” she tweeted, with a link to her website that said:

“I know that many of you have read the DuJour Magazine interview I just did. In the article, I was asked about continuing on with Keeping Up with the Kardashians. As everyone knows, we are extremely proud of the show and all of us are staying on through at least season 10. The show remains to be my No. 1 priority and it’s a big part of my life and I enjoy every moment of it. It has given me such a rare opportunity to share more of my life with all of you and has brought my family closer to each other. I’m looking forward to the new season and beyond. The fact is that I have many goals that I still need to reach and accomplish and I (like so many of you) don’t know where my life will be in the next couple of years, but I’m looking forward to continuing this journey.”

Perhaps the pregnancy hormones are causing her hair to grow? Due in July, the reality star tweeted, “Baby hairs,” with a (somewhat random) photo of her baby hair. 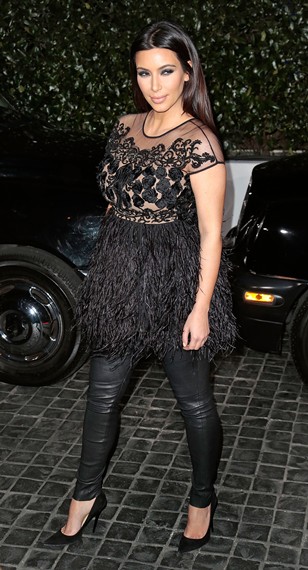 Singer Pink is part loving mom and part kick-butt rock star — as evident in her most recent tweet.

Pink is on tour and tweeted this photo of her daughter Willow pointing at a billboard of her through the hotel window: “Hahah that’s weird,” she tweeted.

“Hey moms. Read my blog.. Would you hire a hot nanny?” tweeted Jenny McCarthy, who has a son named Evan.

“I never once thought for a minute that my man was fantasizing about the nanny or would ever think about sleeping with her. Looking back, I was pretty naive,” she wrote in the article, saying she actually called a “non-famous” ex-boyfriend to ask if they fantasized about the nanny. “There are countless accounts of celebs in tabloids that have been busted having an affair with their nannies and every time I’m always shocked, mainly because I usually think like a guy (or at least from a guy’s perspective) and I can’t believe I let this one get past me. “

“I had a dream I was pregnant again last night… Oh dear!” tweeted Tori Spelling, who is already a busy mom to 5-year-old Liam, 4-year-old Stella, 15-month Hattie and 5-month-old Finn.

She also reminisced about her C-section with her son Finn. “Nothing scarier than going into surgery… But it was worth it! #FinnTime,” she tweeted, with a link to her blog that said in part: “From the moment we got to the hospital in preparation of Finn’s big arrival I was a nervous wreck. We had a scheduled C-section, and even though I’d been through this 3 times before I was a mess. Super anxious, totally scared, dreading surgery and thinking the worst,” she wrote. “Clearly, I was totally emotional as we went into surgery, but luckily I had great people supporting me.”

46 mins ago
by Elise Sole