Sometimes, you can’t help but credit fate with bringing two people together. Jackie Currie has worked with children with special needs for close to 40 years. Lisa Tendler has introduced yoga to thousands of people over the course of 20 years. Those 60 years of experience combined to bring yoga to parents and their children with special needs in a unique class developed with peace in mind. 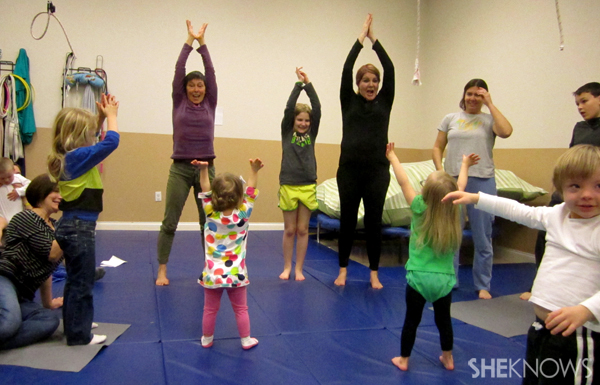 Namaste. Welcome to an eager mother’s first foray into the world of yoga… with my sweet son, Charlie, who happens to have special needs.

Close your eyes, please. Imagine if you will, a scene where chaos clashes with tranquility. Where over-caffeination collides with determination. Where my son’s lower lip becomes glued to the yoga mat in stubborn, not-at-all-silent protest.

Murphy’s Law clearly states that a mother’s level of excitement for an activity will be the inverse of her children’s interest in complying to accomplish that activity.

Jackie’s and Lisa’s Law reminds me that our transitions are our destination.

Charlie is nearly 3 years old and has Down syndrome. His sister, Mary Emma, is 15 months and fond of toddling full throttle with her elbows bent and hands in the air, as if when she falls, it will be skyward. Why wouldn’t I feel confident about bringing them to a yoga class?

Maybe because, like a promise from the lips of the karma gods and after rallying behind Charlie’s former physical therapist, Jackie Currie, to develop a yoga class for children with special needs, my children were the ones running roughshod during her class’s maiden voyage.

Granted, if I were normal (i.e., not trying to turn every activity into an article for someone else’s consumption), I would have taken Charlie only. But no. I had big dreams for this hour of tranquility, peace, reflection and mind stretching.

The entire family piled into the minivan. (Sigh.)

The Husband had been tapped early on as event photographer. We arrived late, absent a yoga mat or beach towel and overflowing with too much energy for a Zen-inducing yoga class.

No matter. Jackie and Lisa Tendler, the yoga instructor, had enough Zen for everyone. 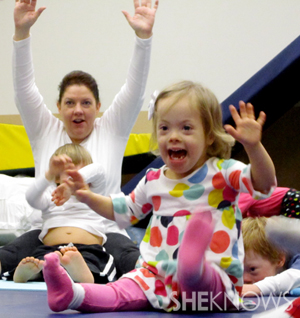 A group of about 20 gathered in the larger gym area at Lake Norman Children’s Therapy in Huntersville, North Carolina, where Jackie and a team of therapists provide physical therapy to children with a variety of extra needs.

That almost-snowy Saturday marked the first time Jackie and Lisa had instructed a yoga class for children with special needs. They had worked on techniques, exercises and adjustments for weeks.

Most participants were children with Down syndrome, like Charlie, younger than 5 years old and accompanied by his or her mother. Two teenage girls with special needs joined as well. Jackie and Lisa had enlisted the help of several volunteers to make sure the group had enough support (and, unintentionally, that all exits would be blocked when my kids made a break for it).

The truth is, a special place in heaven exists for individuals who teach a yoga class to toddlers. It’s a bit like wrangling penguins in the arctic. Just when you think you have one or two where you want them, they slip off the iceberg and swim to another, shinier, momentarily more interesting surface.

But that’s what makes Jackie and Lisa special. They never blinked, and each twist and turn (mostly from Charlie) gave them another opportunity to draw in another child. The truth is, most of the children were so well-behaved and had a wonderful time mimicking the poses, from arm stretches to leg kicks. 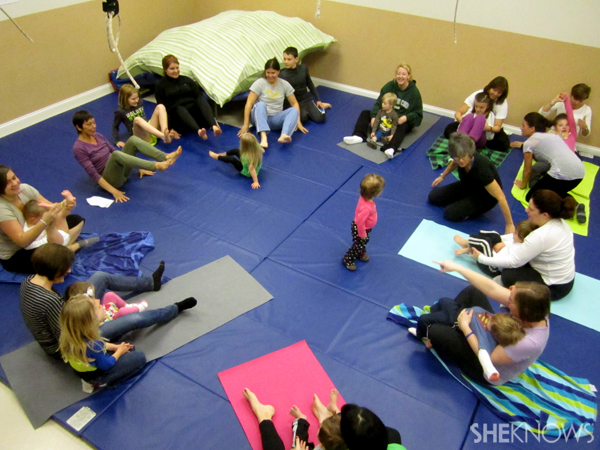 I understood Jackie’s and Lisa’s point, that yoga benefits a child with special needs. “[In physical therapy], we use breathing with our children a lot,” Jackie explains. “Depending on the child’s need, we give them an awareness and input on where their rib cage is and belly breathing, for example.”

Yoga is all about breathing. Careful, controlled breathing.

Indeed, only my children impersonated nomadic yogis, wandering from child to child and from parent to instructor, staring at their handiwork or (from Charlie) periodically screeching and clapping in delight (encouragement?).

My 15-month-old daughter, Mary Emma, had a look of utter bewilderment for much of the hour. Possibly because she had no parent tending to her every move, as I tracked Charlie (and pretended he was going to acquiesce and strike a pose, when I could tell he was far more interested in socializing) and The Husband clicked away with the camera.

In the beginning: Dreams and conversation 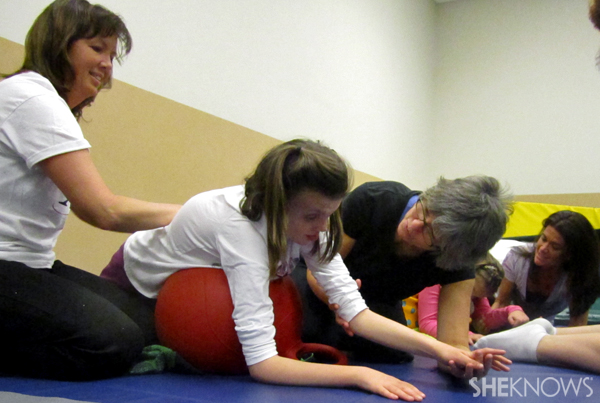 This was the women’s first go-round. With decades of experience between them in physical therapy and yoga, Jackie and Lisa had talked about collaborating for some time.

Lisa suggested offering the class free of charge. “There are so many families who are bombarded with expenses and don’t have the money,” Jackie said. “These families have lots of things on their plate, so Lisa said, ‘Let’s just do it free, by donation.’”

How does a yoga instructor complement a physical therapist? As it turns out, quite naturally.

“She’s good,” Jackie says of Lisa. “Her observation is great and she has unbelievable knowledge of the muscles and nerves… So I said, we’ll do this as a team. She would lead the class and I would be floating among the parents and children for hand positioning, posture. [For example], if a low-tone child like Charlie might not want to do [a certain position]… we could change it for him.”

What struck me, when I first sat down with Jackie and Lisa, exactly one month before their first class, was how easy-going they both are. The way they described developing the class sounded just so appealing and so… very much like parenting a child with special needs.

“There will be a metamorphosis [from one class to the next], and that’ll be good,” Jackie shared. “[Lisa] always says live right there in the moment, and know that your transitions are your destination.”

Did we find tranquility? How literal is your definition?

“I thought it went well considering the age group,” Lisa shared afterward. “Typically, the younger age needs a shorter class. The longer, more controlled holds come later. The older girls would have benefited much more from a class like that so next time we might arrange the time a little differently.

“It was a good start. I have lots of ideas now of how to get the parents a little more involved [and] the kids a little more focused, [but] it was great that they had some free time to just hang out and play together.”

An hour of friendship

What we found, without question, was an hour of camaraderie and sheer fun. The room was filled with moms who rarely see each other, and children who are rarely in the same room at the same time for a dedicated activity.

“[The] best part was seeing a smile on all faces, both kids and parents,” Joanna said with a smile. Her son stayed by her side and followed the class with constant enthusiasm. “We had a great time!” she said.

The smiles. The smiles were to infinity. Tamara’s 4-year-old son beamed for the full hour, high-fiving everyone before we parted ways.

“[We] loved the class!” Tamara shared. “Great environment — awesome teacher and volunteers! [My son] was so proud of himself… not sure if you noticed all the high-fives… ”

Tamara confessed that the class was a jolt for her, reflecting that once her son had learned to walk, she shifted her focus away from physical therapy and core work.

“That is such a mistake,” she said, “because a strong core is important for some much more than walking… I can see the benefit of controlled stretching and core work for a child with low tone,” she said. “Some of those moves were pretty challenging for Mama!”