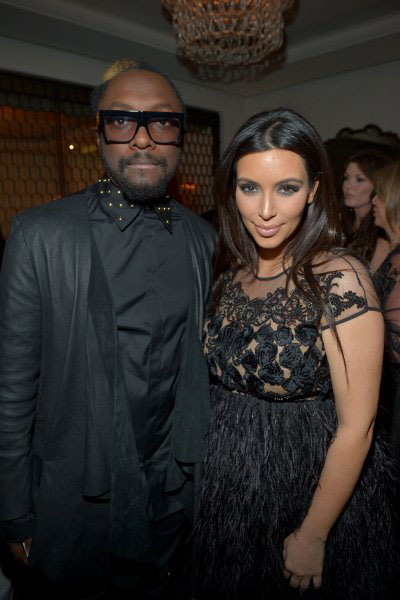 Pregnant Kim Kardashian hides her baby bump behind a skirt of feathers as she poses with will.i.am at the Topshop Topman LA Opening on February 13.

Kim K. is expecting her first child in July with her boyfriend, Kanye West. The couple hasn’t revealed the sex of the baby — however her mom Kris Jenner says she thinks it might be twins!

What does Grandma think of the sex of the baby?

“I don’t know, I’m not even going to try to guess,” Kris said. “Kanye wants a boy but would be happy with a girl too, he doesn’t really care. Kim wants a little girl badly. But right now, nobody knows what they are having.”

Next up: Pregnant Kristen Bell bares her baby bump

5 Ways to Tell if a Hotel is *Actually* Family-Friendly

49 mins ago
by Holly Pevzner

Is This One Example When Mansplaining to a Pregnant Woman Is OK?

Tia Mowry Reveals Her Parenting Essentials, Including The Goonies

23 hrs ago
by Amelia Edelman

Fun Activity Books for Kids to Keep Them Entertained