Which celebrities had the most buzz-worthy baby bumps of the week? Fergie is pregnant with her first child with her cute husband Josh Duhamel. Reggie Bush was spotted with his pregnant girlfriend (and Kim Kardashian look-alike!) Lilit Avagyan as they left a nightclub, while pregnant Kim K. dressed her bump in feathers. Kristen Bell tweeted a photo of her bare baby bump, while Jessica Simpson was spotted wearing her own maternity line. Pregnant Jamie-Lynn Sigler rounds out our list of cute celebrity bumps. 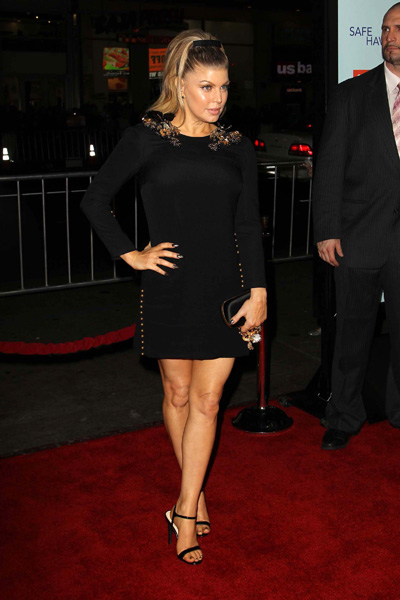 Fergie and Josh Duhamel are expecting their first child together! The 37-year-old Black Eyed Peas singer made the announcement via Twitter:

“Josh & Me & BABY makes three,” she tweeted, with the hashtag “my lovely baby bump.”

The couple have been married since 2009 — and they both have been open about wanting a family, however Fergie admitted to Rachael Ray that it was tough battling baby bump rumors when she wasn’t pregnant.

“[People ask if I’m pregnant] every time I fluctuate a few pounds. Like right now, I’m a couple pounds up,” Fergie said last September. “Sometimes I go a couple pounds down and I wear the clothes that are more fitted, but people kind of look at me because they’re expecting [that] it’s that time. We do hope for children and that will be coming up, but it’s not yet.”

No word how far along Fergie is, however this photo above is from the Safe Haven premiere on February 5 and we don’t spot much of a baby bump quite yet. A source indicated to Us Weekly that she was early in her pregnancy, saying, “They just found out and tweeted it to the world.”

Next up: Pregnant Jessica Simpson wears her own line of maternity clothes