If a mom has excess breast milk, is she within her rights to try to sell it, or should it always be donated? We explore both sides to find out how moms feel about the practice of selling breast milk.

Related story Olivia Munn Got Very Real About the Struggles of Breastfeeding: 'So Hard'
Is breast milk a commodity? 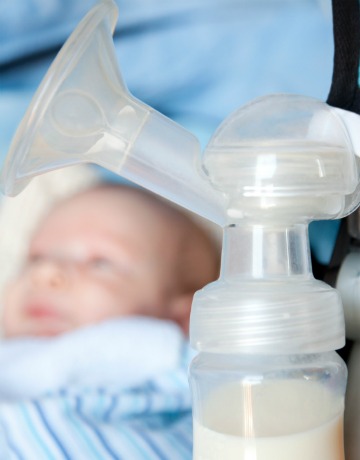 Many babies rely on breast milk donation. There are several avenues of donation for moms, but some mothers wonder if it’s worth it — or even ethical — to sell their excess milk. We talked to moms at both ends of the equation to see where the general consensus lies.

Breast milk donation can be done a number of ways. There are official donation routes, such as through the Human Milk Banking Association of North America, where donors undergo screening and the milk is heat-processed (pasteurized) to remove harmful bacteria and viruses. There are also informal milksharing communities, such as through the Human Milk 4 Human Babies Global Network, where local donors are matched with those in need and screenings or blood tests are options left up to the individuals.

There is a significant gap between the number of babies who need breast milk and the amount of milk that comes through donations — so there is definitely a market for selling it. Only the Breast is one example of an online marketplace for the buying and selling of breast milk — a buyer can read the ads, request health screenings and arrange meetings or transport directly from the seller.

Many moms feel that breast milk should only be donated, and not sold. Breast milk is often a true need — for example, preemies in the NICU are often too small to nurse effectively, and Mom’s milk has yet to come in. Another scenario might be babies whose mothers have trouble nursing but couldn’t tolerate infant formula — and selling milk as opposed to donating it doesn’t seem right to some.

As Brittney, mom of two, explained, “I can’t imagine selling breast milk. Profiting on someone else’s misfortune and attempt to do what’s best for their child seems very wrong to me.”

Paying for supplies, such as milk storage bags, is often an expense that moms who receive donated milk are more than willing to help out with. Kim, who used donated milk for her baby, shared, “I paid for milk bags and sometimes other expenses (breast pump rental, shipping and so on), and I would usually get a small gift for the mom or her children. We could not have afforded to pay for milk in addition, since we either had to drive quite a distance for most of the milk we found, or have it shipped which is quite expensive.”

Selling is a right

Others feel that the time and energy expended in pumping breast milk deserves compensation. “I am 100 percent in favor of selling any body parts or substances that you want to,” said Skye from Oregon. “Milk, a kidney, blood — whatever. I think that competent adults should be able to make such decisions on their own.”

Kim said, however, that if buying the milk had been an option, she would not have done so. “Not because I don’t believe that moms who pump milk for other women’s babies should not be compensated for their time,” she explained, “but because I feel that it makes the process more risky for my family.“

Kim continued, “When a mom is taking the time to pump and donate out of kindness, with no financial motive, she has nothing to gain from lying to me. But if I’m paying for the milk, someone might stretch it out with cow’s milk (which I believe happened to a mom in my network) or lie about her lifestyle.”

Donating breast milk is an amazing, generous gift that moms who have a way with a pump are able to give, and while opinions are divided on the subject of selling vs. donating, most moms feel that donating is the way to go. The babies who receive the milk are granted not just nutrition, but sometimes even their health and their lives. “I was born a preemie 33 years ago and I received donated breast milk,” shared Andrea, mother of two. “I am eternally grateful to the wonderful mamas back then who donated so I could have milk. I would not try to profit off my milk if I donated. Being able to help a mom and baby in need would be more than enough for me. Giving the gift of nourishment to a baby in need would complete a space in my heart.”

Why moms choose to breastfeed
Why you should breastfeed your toddler
Breastfeeding photos: Moms with their babies